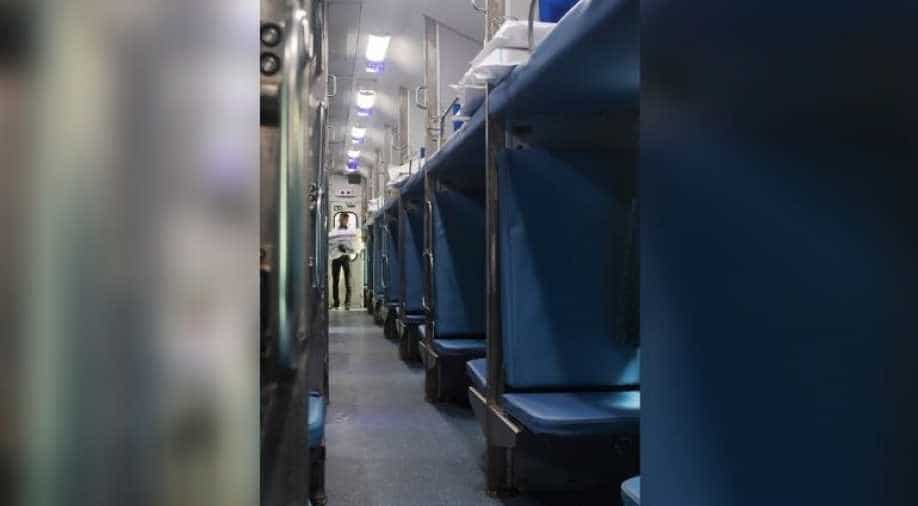 The inside of an Indian train Photograph:( AFP )

In these coaches, all except one berth have been removed in the patient cabin and each cabin has been isolated with ply and plastic curtain

Indian Railways on Saturday announced that one of its prototypes has been converted into an isolation ward on a trail basis in view of the growing number of COVID-19 cases in the country.

"Ten cabins will be available with six berths in each and there will be separate cabins for patients and medical staff, said the official.

"Each compartment can be converted into a cubicle for one patient when needed. However, one compartment will have to be used as `nursing station` for healthcare personnel," said the official while adding "with minor changes, one coach can handle upto eight patients."

"To make the patient cabin, the middle berth has been removed from one side, all three berths in front of the patient berth have been removed, all ladders for climbing up the berths have been removed. The bathrooms, aisle areas and other areas have also been modified to prepare the Isolation Coach," he added.

In these coaches, all except one berth have been removed in the patient cabin and each cabin has been isolated with ply and plastic curtain, said the official.

Meanwhile, in the Doctor, Nurse and Medico-cum-store Cabins the middle berth has been removed and coat hangars and trays have been provided to hold medicines, the Railways added.

Besides, each compartment has been provided with 220 v elect point for medical instruments.In the worst-case scenario (later stages of pandemic), when capacities of the health facilities including such `train-hospitals` may get overwhelmed, 2 patients per compartment (i.e. 16 per coach) can be accommodated, said the Railways official."As many coaches as required can be converted into `wards/hospitals`. If upto 20,000 coaches are used, around 3,20,000 beds can be made available in train-hospitals," the official added. A total of 11,519 AC coaches and 34,017 non-AC coaches, excluding chair-cars, are part of the initiative.

However, according to experts, the non-AC coaches are better suited (compared to AC coaches) to treat cases of coronavirus infections.

This comes in the backdrop of the Indian Railways` earlier announcement of suspending the running of all passenger trains till March 31 except for the operations of good trains carrying essential supplies amid the worst health crisis witnessed by the nation.