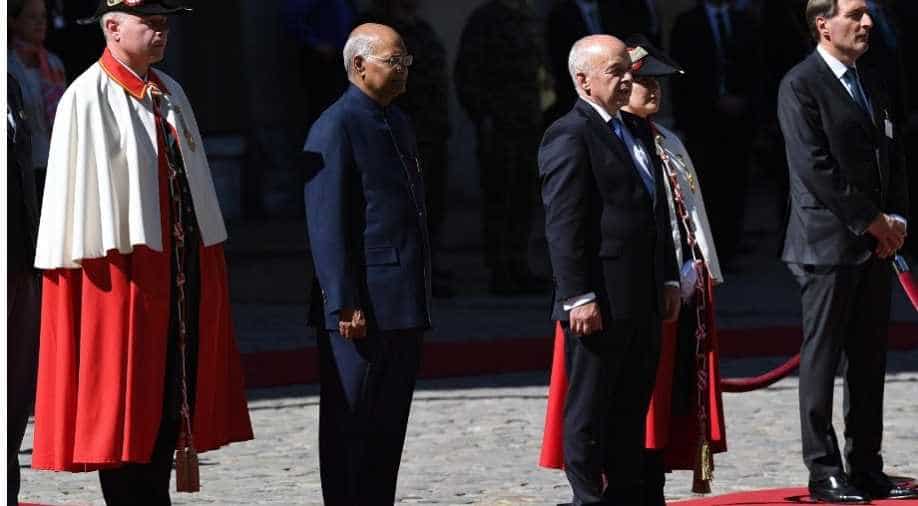 President Ram Nath Kovind being given the ceremonial welcome at Munsterplatz in Bern. Photograph:( ANI )

He said Switzerland is home to high-end technology and India is producing world-class human capital.

President Ram Nath Kovind has invited Swiss companies to invest in India and engage in India's transformation and growth.

Addressing India-Switzerland business roundtable with his Swiss counterpart Ueli Maurer on Friday Kovind said, "India is home to the third-largest start-up network in the world with over 21,000 enterprises. Our 30 unicorns are valued at over 90 billion US dollars. Swiss start-up ecosystem is equally impressive. We must join hands and add value to each other."

He said Switzerland is home to high-end technology and India is producing world-class human capital.

"India ranks as a major global player in areas such as pharmaceuticals, healthcare services, information technology, solar energy, automobiles, space and biotechnology. Our two economies are highly complementary and there is vast scope to combine our relative advantages in capital, technology, science and skills for mutual benefit," Rashtrapati Bhavan said in a tweet on Saturday.

India and Switzerland on Friday signed three agreements to enhance cooperation in the fields of climate change, science and technology, and people-to-people ties following delegation-level talks between Kovind and Maurer.

During the delegation-level talks, the two leaders expressed a strong commitment to strengthening economic and technology ties between India and Switzerland.

Kovind is currently on a three-nation visit to Iceland, Switzerland, and Slovenia since September 9.

He arrived in Switzerland on Thursday following the successful completion of his bilateral engagements in Iceland.