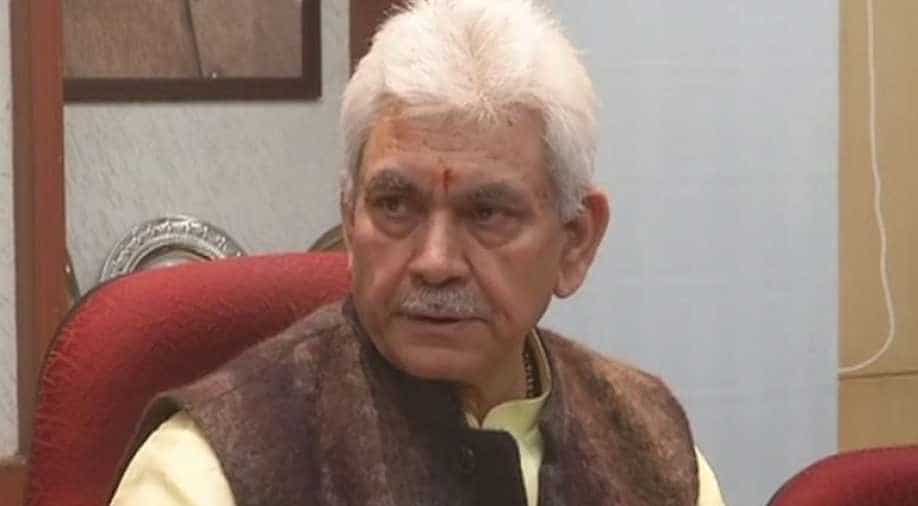 The Jammu and Kashmir administration along with the Culture Department is holding a two-day exhibition and symposium here highlighting the atrocities committed by the Pakistani invaders.

The present generation needs to be educated about proxy wars and Pakistan's ulterior motives, Jammu and Kashmir Lt Governor Manoj Sinha said on Thursday, citing former chief minister Sheikh Abdullah's remarks on the loot and massacre done by Pakistani Army and its raiders on this day in 1947.

Addressing a symposium, organised for the first time to mark October 22 as a 'Black Day', Sinha also referred to Maqbool Sherwani, a National Conference worker, who delayed the march of the Pakistan-Army supported tribals from Baramulla by four days so that the Indian Army could reach there.

"When this barbarity was going on, our Kashmiri brother Maqbool Sherwani raised his voice, but he was fired upon.

The martyrdom of the hero of Baramulla, Maqbool Sherwani, busts the years-long propaganda of Pakistan's holy war.

"The people of Kashmir that time raised the slogans of hamlawar khabardar, hum Kashmiri hain tayar (Beware attackers, we Kashmiris are ready).

They had no guns, but used sticks in guise of guns to threaten the Pakistan Army," Sinha said while appealing to the people not to forget the sacrifices of the soldiers and civilians who laid down their lives.

This is for the first time since Independence in 1947 that an official function is being held in Jammu and Kashmir to mark October 22 when Pakistani tribals raided the then princely state ruled by Maharajah Hari Singh.

The Jammu and Kashmir administration along with the Culture Department is holding a two-day exhibition and symposium here highlighting the atrocities committed by the Pakistani invaders in Kashmir under Operation Gulmarg.

"The leader of terror in the world, our neighbouring country, has not only lied in the Kargil war of 1999, but 73 years ago as well when it put the clothes of Pakhtoon people on its army personnel.

"The youth of the new generation of Jammu and Kashmir may perhaps not know how Pakistani rulers and their army mercilessly killed our innocent brothers, burnt our houses, raped our sisters and daughters under operation Gulmarg..."We want to remind our new and old generation how this soil of Sarv Dharm Sambhaw (communal harmony), unlimited love and Sufism was painted with the blood of innocents by Pakistani army leaders, Mohammad Ali Jinnah and his Army on the Black Day of October 22 that turned the centuries-old brotherhood into animosity," he added.

He said continued atrocities were a "reality of Pakistan".

"...But today, some people say several types of things. I want to tell them that they should remember what Sheikh Abdullah had said in 1948. He said that Pakistani attackers had killed thousands of innocents on our soil, kidnapped girls of all religions and destroyed properties. So, there is a need to break the lies being spread over the years," he said.

Sinha said time had come to lift the veil from Pakistan and its sympathisers.

"I think we should do it with promptness. The stories of Pakistan's betrayal, the bravery of the people of Jammu and Kashmir against the Pakistani Army and its proxies, and the sacrifice of our brave jawans should reach everyone. That is the aim and objective of this symposium and exhibition," he said.

The LG said the world has understood the reality behind Pakistan's lie and propaganda that the attackers were just Pakhtoon tribals.

"We have to fully understand this nefarious act of Pakistan that the f army which killed the people of Kashmir consisted of people from the Pakistani government and its army. I have read documents in which it is written that every tribal contingent was commanded by the officers of the Pakistani Army," he added.

The LG said while October 22 is a black day, it is also a moment in the history of which the new generation has to be made aware.

"Terror is the biggest enemy of humanity. You all know who the nourisher of terror is since 1947. If you see the reports of any intelligence or security agency of the world, you will get the answer in clear terms," he said in an apparent reference to Pakistan.

"We will face challenges on the way of development and trust which we are treading, but I want to assure you that we will stand up to them and rest only when we make Jammu and Kashmir, which is the crown of India, the most developed region," he added.