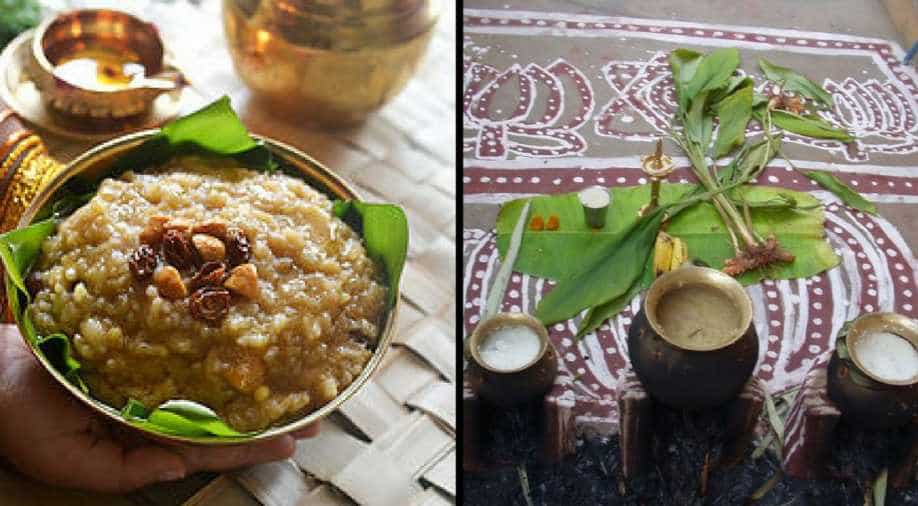 The harvest festival of 'Pongal' was celebrated with traditional fervour across Tamil Nadu and neighbouring Puducherry today with the bull-taming sport of Jallikattu and a host of other games pepping up the festive spirit.

Though celebrated across urban and rural areas with salutations to the sun god and nature, it was more fun and zeal in the hinterland with a host of traditional games.

'Jallikattu' was held in Avaniapuram in Madurai district, the first such event of the year. Participants wore colour- coded T shirts for easy identification. The bulls were allowed to enter the arena only after a fitness test by authorities.

Elaborate arrangements were made for the event under the direct supervision of the District Collector. Teams of local officials,veterinarians, and paramedics were deployed, besides ambulances. Winners were given prizes, including bureaus and other consumer appliances, by the village prize committee.

A total of 643 bulls were registered for the event, which was held peacefully and by following all rules, Revenue Minister R B Udhayakumar said, adding no participants or bulls were injured.

The Tamil Nadu tourism department conducted the fest in several parts of the state, including Tirunelveli, Thanjavur, and Kanyakumari, where foreign tourists took part in preparing sweet rice (Pongal) and witnessed cultural events like stilt walking and fencing.

The prizes will be given on behalf of the AIADMK, symbolising the two-leaves symbol of the ruling party, he said.

Traditional marital art 'Silambam,' folk dances like 'Karagam' and games like rope-pulling and 'Uriyadi,' which involves hitting a pot hung from rope tied to poles on two sides with a stick were also held in many parts of Tamil Nadu.

The Police department held events across the state to celebrate Pongal, which served as a stress-buster for the uniformed personnel and their families.

Every street and locality was decked up with a fresh coat of 'kolam' (rangoli, drawings made of flour) welcoming the Tamil month of 'Thai', the dawn of which is traditionally viewed as a harbinger of new beginnings and prosperity.

Homes were decorated with mango leaves and strings of flowers as a mark of ushering in auspiciousness. People offered special prayers at temples and exchanged greetings.

Sweet rice (Pongal), made of jaggery or sugar with rice and milk, in a traditional mud pot, was offered to the Sun God along with pieces of sugarcane.

The food was also shared with relatives and neighbours. Cinema halls drew huge crowds and almost all business establishments, including retail outlets and the ubiquitous tea stalls, were shut as the festive mood took over.

Security has, meanwhile, been strengthened at several places, including Marina Beach here, where people throng in large numbers during 'Kaanum Pongal' (when people go on an outing) festival on Tuesday.

Pongal is celebrated traditionally for four days beginning with Bhogi, which was observed yesterday.

Chief Minister Palaniswami sent a bouquet and extended his best wishes to the Governor and his family on the occasion.

In Puducherry, people clad in new garments turned up at various shrines to offer prayers to deities.

Lt Governor Kiran Bedi, Chief Minister V Narayanasamy and his ministerial colleagues were among those who greeted the people of the Union Territory.