With focus on space, hydropower and RuPay cards; PM Modi to leave for Bhutan on Saturday 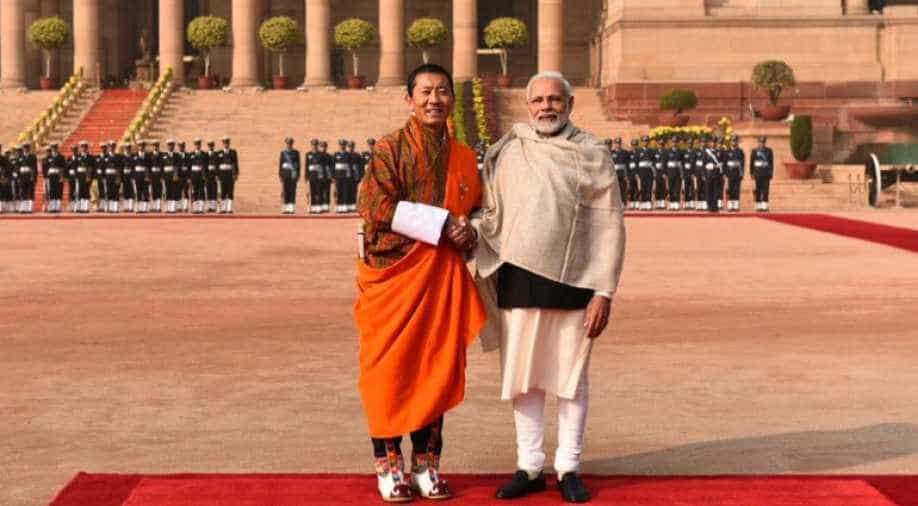 Bhutan was PM's first foreign destination after assuming office in 2014

Prime Minister Narendra Modi will be on a two-day visit to Bhutan from Saturday morning with the focus being on space, hydropower projects and Ru Pay cards.

The visit scheduled from August 17 to 18 will be the second visit of PM Modi to the South Asian country. Bhutan was PM's first foreign destination after assuming office in 2014.

The Prime Minister is expected to leave by 10 am on Saturday.

The itinerary of the prime minister's official tour includes a visit to Simtokha Dzong, a monastery built by Ngawang Namgyal who unified Bhutan. He will then receive audiences with Bhutanese King Jigme Khesar Namgyel Wangchuck, the fourth King of Bhutan Jigme Singye Wangchuck and hold talks with Prime Minister of Bhutan, Dr. Lotay Tshering.

The PM will meet all members of the Bhutanese Parliament, deliver a major address at the Royal University of Bhutan and will also visit the national monument.

Foreign Secretary Vijay Gokhale said, "PM is looking forward to his visit to Bhutan. He has a very strong personal relationship with both majesties the king, his majesty the fourth king as well as the Prime Minister Dr Lotay who also graced the swearing-in the ceremony of PM in May. We are confident as a result of this visit our unique relationship with Bhutan will be further strengthened. "

Asked about Thimpu's view on India abrogating article 370, Foreign Secretary said, "Bhutan has shown understanding that this is a matter of India's internal affairs"

Prime minister during his visit will inaugurate Mangdechhu hydropower, a ground station build by ISRO at the cost of Rs 7 crore in Thimpu which will help Bhutan use the transponder in the south Asian satellite and roll out RuPay card. The ground station will help in disaster management and communication service by Bhutan broadcasting service.

Built-in the Trongsa Dzongkhag district, 720MW Mangdechhu hydroelectric plant is the fourth power project which is in joint commission with Bhutan. It has four units, three of which have already been commissioned.

Foreign Secretary Vijay Gokhale called it the most effective hydro project in South Asia. It is on 70 per cent loan and 30 per cent grant and New Delhi will also sign the Mangdechhu power purchase agreement. It will also start discussions on Sankosh multipurpose hydroelectric project which will generate 250 MW electricity. Bhutan exports three fourth of power generated, which is surplus, to India and uses rest for domestic consumption.

Bhutan will be the second country to roll out RuPay card. The card will be rolled out in two phases, the first phase by Indian banks and the second by Bhutanese banks. The trials happened in March.

China: Dragon in the room

This will be the first visit by PM Modi to Bhutan after the Doklam crisis of 2017. The crisis saw a two-month-long standoff between Indian and Chinese army in Bhutanese territory of Doklam which is claimed by Beijing but is part of Bhutan

"We will review defence and security and that includes situation along the India-Bhutan boundary," Foreign Secretary said.

Asked if China plans to open a representative office, Gohakle said, "We enjoy a relation with Bhutan in which neither side will surprise each other. We are confident that we will be taken into confidence in anything that the royal government of Bhutan does.

The MEA in its release, talking about the ties between the two countries said, "India and Bhutan share a special and time-tested partnership" which are "anchored in mutual understanding and respect and reinforced by a shared cultural heritage and strong people to people links."

During PM's visit to Bhutan in 2014, he addressed the Joint Session of Bhutanese Parliament, laid the foundation stone of the 600 MW Kholongchhu Hydropower Project and inaugurated the Supreme Court building which was constructed with the assistance of the Government of India.