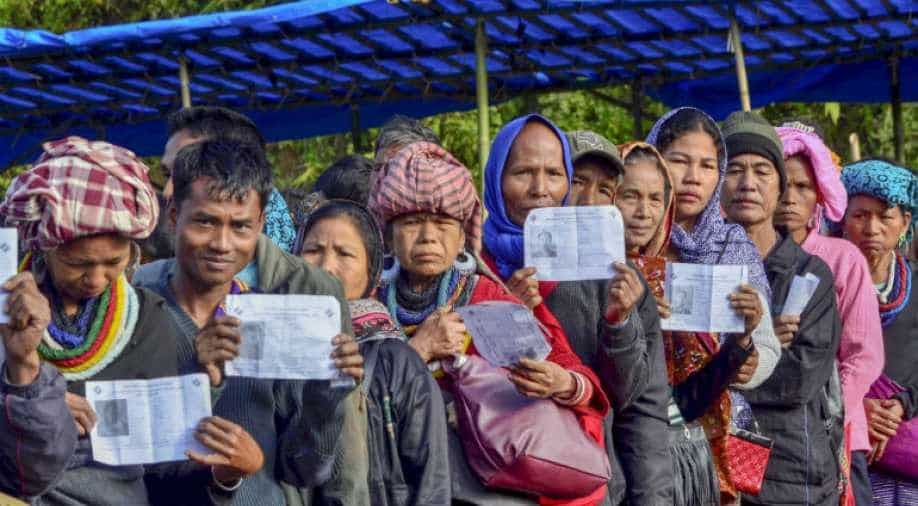 People queue up to cast their votes in Mizoram. Photograph:( PTI )

Proving that age is just a number and nothing else, a significant number of people falling under the age group of 90 to 100 years, and even above, came to the polling stations to exercise their franchise in the ongoing Madhya Pradesh and Mizoram Assembly polls on Wednesday.

Although a majority of these women were visibly fragile, their determination to contribute to strengthening democracy in the states was motivation enough to come out and cast their votes.

In Mizoram's Kawrthah, a 106-year-old woman arrived to cast her vote in a wheelchair along with a family member.

A number of people belonging to the Bru community including aged women queued up to vote in the Assembly elections. With a pale face and wrinkled skin, an elderly woman posed for the media showing her inked finger.

At present, over 12,000 Brus are living in six relief camps in Tripura. They are voting at Kanhmun village in Mamit district where 15 temporary polling stations have been set up. To safeguard the interest of the Bru community, special polling arrangements have been made across the state. Food and transport facilities are also being provided to those coming to vote.

In Madhya Pradesh's Agar Malwa district, a 101-year-old woman arrived at a polling booth to cast her vote.Guided by the motto of "no voter to be left behind", the Election Commission has made adequate arrangements for differently-abled persons to exercise their franchise. Volunteers have been trained to guide these people to cast their votes.

Experts working for the upliftment of the disabled in the society believe that special machines for visually impaired and sign-language interpreters for those who cannot hear should be provided by the authorities to help them during the time of polling.

Voting enthusiasm also soared among the young minds, many of whom voted for the first time. In both the states, youngsters, including women, came out in large numbers.

A first-time woman voter standing outside a polling booth in Bhopal said that she is voting in the name of development.

"I am voting not only to contribute to democracy but also for the development of the region. It will be unfortunate for women that even after the smooth process of elections they are not exercising their franchise. Please vote to bring change in the society."