Opinion: Tough life of immigrant, art and long drive in the making of poet Rupi Kaur 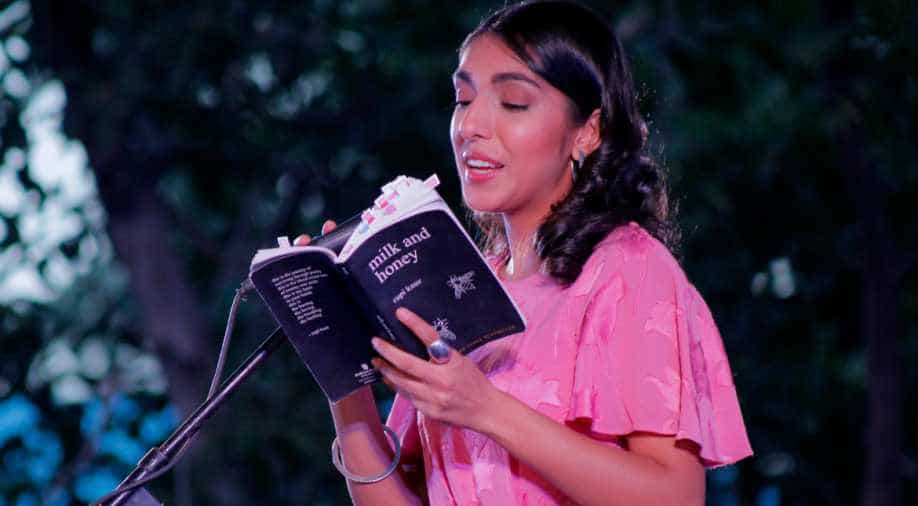 Poet Rupi Kaur reads out from her book 'Milk and Honey' at the ZEE Lit Fest 2018 (Photo: ZEE Lit Fest) Photograph:(Others)
Follow Us

I think it was one of those wintry December nights on the 25th floor of my friend’s two-bedroom apartment that I came across a book with a black cover titled, ‘Milk and Honey’. Curious about the name of the book and the author I opened the book. To my surprise it was poetry.

But it was not the ones you must have read in your school or colleges or even online. Some were just four lines, some a page long and some just a few words. It had illustrations of some kind on them too! It got me intrigued. I asked my friend, who is this Rupi Kaur? She questioned my existence and, even our friendship, in asking, “You don’t know Rupi Kaur?”

I looked at her and the book again! “I am sorry. I do not know her." ,” I replied staring at the blank wall. Her poetry is new to me and I liked her writing, hence, I wanted to know who Rupi Kaur is. In of one the many poems, one read, “You are the faint line between faith and blindly waiting” and there were notes inscribed at the bottom left of the page!

I looked up Rupi Kaur in this thing called the ‘World Wide Web’ and to my surprise, she was hardly in her early 20s, in fact just 25! A little looking her up lead me to know the girl from Punjab, of course, the name suggested she was an Indian – but lived all her early years as an immigrant in Brampton.

And so that day, I decided that whenever I get to interview this 25-year-old, I will talk to her about the girl behind the alphabets, the words, the lines, the reason for so much pain. And so there I was, sitting right across Rupi Kaur in a room at ZEE Lit Fest!

I started off the interview saying, “Let’s get the boredom out. Yes, we will speak about your works but I want to know the other side of Rupi Kaur.” The author of two books replied, “Thank God. Let’s do this.” And there began my interview where I got to know her.

This morning, I told the flowers what I'd do for you and they blossomed

From Rupi Kaur’s second book ‘The Sun and her Flowers’ this is one poem that stood out. And I started off with this one. “The inspiration behind this poem came from one of the Punjabi folk songs that my father had shared a few years back. When I heard the song I was filled with emotions. I just wanted to take it all out in English. It took a while but when I was done, I ended up writing this,” she said.

For someone who published her first book when she was just 22, she has come a long way from being just an immigrant in a foreign land to the author of a book. And in 2015, her book was picked up by Andrews McMeel Publishing. And she became an overnight sensation. But hardly do we know about the pain she had to endure to get there. “You know it was really difficult for me and my family to leave our house, motherland behind and move to a different country. It was really difficult for everybody to live as an immigrant. My mother had to sacrifice a lot to ensure I was taken cared of.

She continues, “Life was really difficult. I did not know a single alphabet in English. When I went to attend my fourth-grade class, I was lost. I was completely out of place. But then I had my mother and she was the driving force behind me. I had to work really hard and slowly it came to me naturally.

I started reading a lot of books and that helped too. Slowly I got into poetry and picked up public speaking too. I loved the way the microphone picked up my voice. And, thus, began my love affair with the microphone,” she recollected.

There are days when a writer could finish up 5 pages of a novel and then there are days when not a letter makes sense. What does Rupi do when she gets those ‘No words days’? “Ah. I love long drives. I turn up the music on loud and drive. Just keep driving until I (am) back to normalcy. If I don’t do something to do with art for say a week, I lose my composure. I just need to be involved in an art form or two” she said.

“I work out a lot to de-stress myself. As well. But then there are days when you don’t want to exercise. On those days I just hit the spa. You know, Art is necessary to me. Art to me is what breathing is to people. I paint, draw, click photographs I need art that’s as simple as that,” Rupi added.