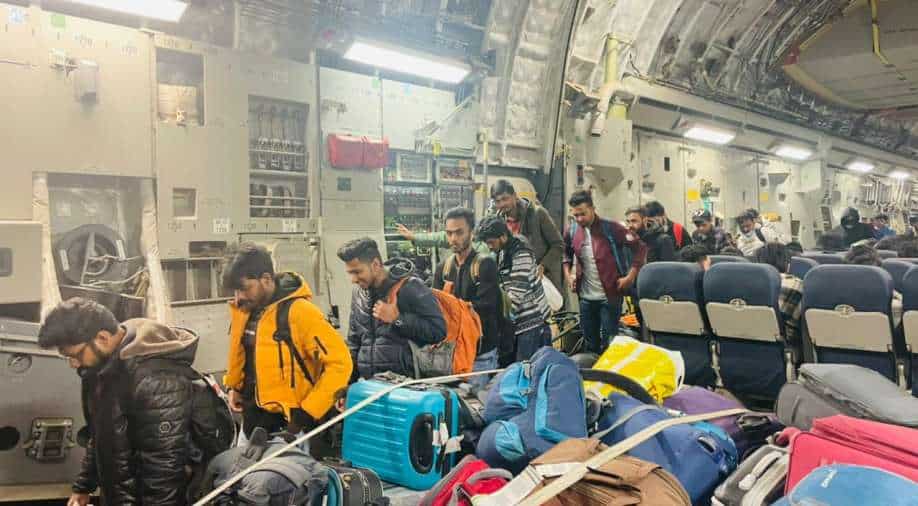 Till date, the IAF has flown 10 flights to bring back 2,056 passengers, while taking 26 tonnes of relief load Photograph:( Agencies )

So far, around 20,000 Indians have left the war-torn country, with roughly 2,000 to 3,000 still stranded in Ukraine, according to government's estimate

Three C-17 Globemaster III transport aircraft of the Indian Air Force, carrying 629 Indians from neighbouring countries of Ukraine, landed at the Hindan air base near New Delhi on Saturday morning.

Under Operation Ganga, these flights evacuated Indian nationals from Romania, Slovakia and Poland.

They also carried 16.5 tonnes of relief load from India to these countries.

Till date, the IAF has flown 10 flights to bring back 2,056 passengers, while taking 26 tonnes of relief load to these countries, as part of Op Ganga, the IAF said in a statement.

Eleven more special civilian flights are also expected to land today with more than 2,200 Indians from Ukraine's neighbouring countries, according to reports.

Additionally, four C-17 aircraft are airborne for Romania, Poland and Slovakia, which are expected to reach late at night and early morning today.

So far, around 20,000 Indians have left the war-torn country since India issued its first travel advisories in mid-February.

More than 2,000 Indians are still stuck in Ukraine, the government said, adding that arrangements are being made to evacuate everyone.

"We will continue Operation Ganga till the last person gets evacuated. Roughly 2,000-3,000 (more Indians) are likely to be there (in Ukraine), the number can vary," Ministry of External Affairs Spokesperson Arindam Bagchi said at a briefing.

"Our primary focus is to get Indian students out of conflict zones in eastern Ukraine. We are urging both sides (Russia and Ukraine) to find ways so that we can take out our citizens. A local ceasefire would help," he added.