On trade deal with US, India says 'don't want to set artificial deadlines' 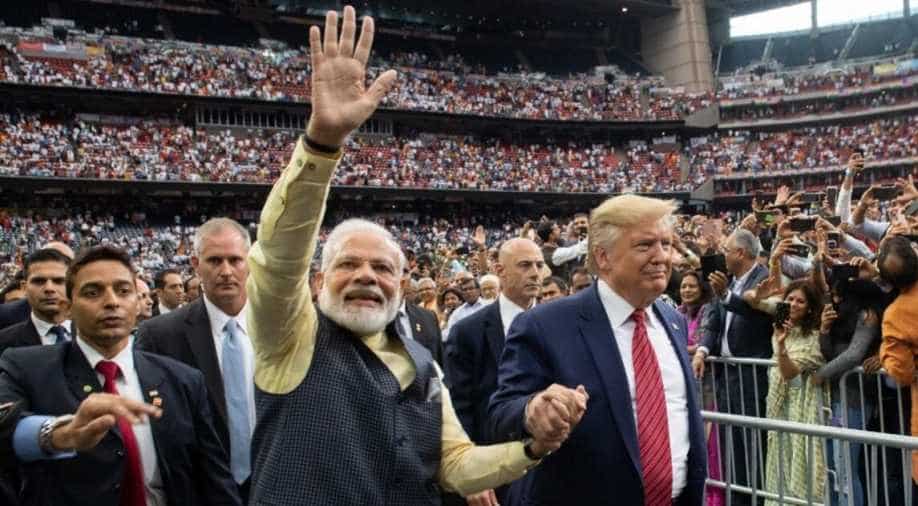 PM Modi and President Trump came together to address the Indian-American community at 'Howdy, Modi' event at the NRG Stadium in Houston with both leaders pledging to further strengthen India-US ties. Photograph:( AFP )

As Donald Trump heads to India for his first presidential visit, the government described his upcoming visit as "brief but intense", promising to make the "Namaste Trump" event grander than the "Howdy Modi" event in Houston last year. This, notwithstanding the fact that the much-hyped initial trade deal poised to be signed during this visit has now become a non-starter.

Sources say both sides have dug their heels on a possible trade pact after the US wanted more concessions from India than promised earlier.

Adding to the scepticism around the deal, the US trade representative Robert Lighthizer skipped his visit to India last week to meet the commerce minister Piyush Goel.

Brushing aside questions on why the two sides won't be able to sign a trade pact during the visit, the MEA spokesperson Raveesh Kumar today said, "We have been engaging with the United States on trade talks for some time. We hope to reach an understanding with an outcome that strikes the right balance for both sides. We do not want to rush into a deal as the issues involved are complicated with many decisions potentially having a real impact on people’s lives and long-term economic consequences. We do not want to create artificial deadlines."

On possible deliverables, the MEA added, "the visit has to be seen in the context of reaching a certain stage of maturity in the relationship, regular meetings between the leaders of two democracies and the growing comfort level between our two countries. Both leaders have personally invested in this relationship."

India says it's ready to open up its dairy and farm industry to the US (despite domestic opposition) and give further import duty concessions on Harley Davidson motorcycles in return for the reinstatement of Generalised System of Preferences(GSP) for India, easing of visa rules, exemption from high duties imposed by the US on certain steel and aluminium products, and greater market access for its products from sectors such as agriculture, automobile, automobile components and engineering.

However, it looks like India will have to wait longer for anything to materialise, as Trump announced this week that even though he "liked Prime Minister Modi,"  India had treated the US "unfairly" while announcing that the trade deal will have to wait until his November re-election.

But, both sides are looking to leverage the meet despite the trade issues.

India is planning to roll out the red carpet for the Trumps giving Agra a makeover with fresh paint and releasing fresh water into the Yamuna and promising lakhs of people in attendance of the President and the first lady.

In a statement, foreign secretary Harsh Vardhan Shringla said US President Donald Trump's visit would be "brief but intense with all the essential elements of a state visit with two additional legs of Ahmedabad and Agra all squeezed into 36 hours."

The President will first head to Ahmedabad, the prime minister's home constituency to jointly inaugurate the world's largest cricket stadium, the newly built Motera Cricket Stadium with a capacity of 1,10,000 visitors.

Sources say the route from the airport to the stadium will be flanked by 28 stages representing various parts of the country and its rich diversity, not to forget the Indian government has promised an audience of hundreds of thousands of cheering Indians on the way to the stadium and over a lakh inside the arena.

Inside the new stadium, President Trump and Prime Minister Modi will address a full-capacity audience, much like the "Howdy Modi" event. The route will also feature decorations depicting different events in the life of Mahatma Gandhi.

Next, President Trump and First Lady Melania will head to Agra, where the two will spend about an hour at the Taj Mahal until sunset before they depart for Delhi.

On Tuesday, the US president has all his official engagements. In the morning, President Trump and the First Lady will be accorded a ceremonial welcome at the Rashtrapati Bhawan. He will then pay his tributes at Rajghat at the samadhi of Mahatma Gandhi. It would be followed by restricted and delegation-level talks between President Trump and Prime Minister Modi at Hyderabad House.

India says the talks will be comprehensive and cover defence, security, counter-terrorism, as well as trade, energy, people-to-people exchanges and other bilateral matters. Prime Minister Modi would host a lunch for President Trump following the talks. The two leaders would also address the media.

In the afternoon, President Trump is expected to attend private events at the US embassy, including a private roundtable with industry representatives.

And finally, he will be hosted by the President Ram Nath Kovind for dinner on the evening of February 25.

It will be the eighth meeting between the two leaders in eight months. The US is India's largest trading partner in goods and services. The overall bilateral trade between the two sides has increased by over 10 per cent per annum over the past two years to reach $142 billion in 2018 and it is expected to cross $150 billion for the first time this year.

Also, in the last two years, the US has become India's sixth-largest source of crude oil imports, with hydrocarbon imports rising to $7 billion in the last two years. Not to forget, the 4 million-strong Indian diaspora that is important to any US president in an election year, the richest among them being the Gujarati diaspora.

Reports say, ahead of the visit, the cabinet committee on security(CCS) has approved a deal to procure a batch of 24 Lockheed Martin MH60 Romeo helicopters - this will boost India's naval capacity. India's defence procurement from the US stands at $18 billion.

So even though we won't see a full-fledged trade deal taking shape, as India's foreign secretary Harsh Shringla said this week, the visit will showcase the "consequential relationship" between India and the US.