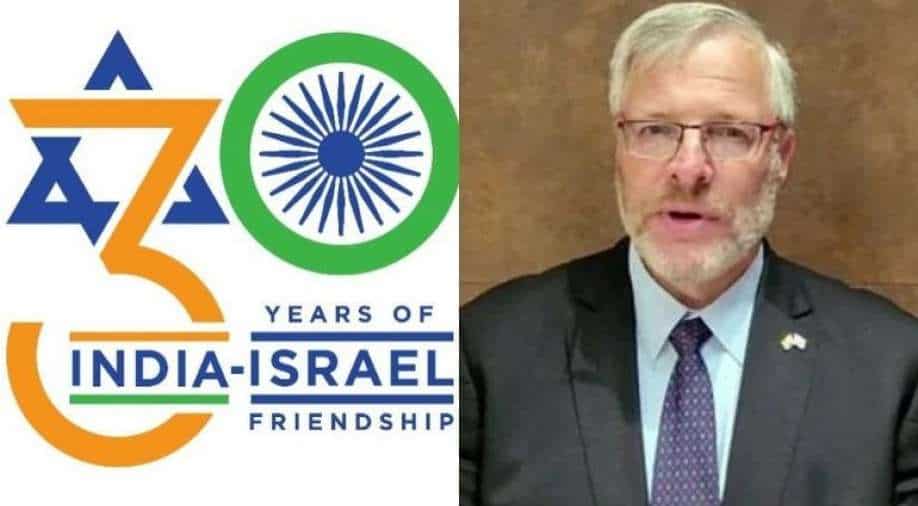 On January 29th, 1992, India and Israel established full diplomatic relations, and this year both sides will commemorate 30 years of ties to give further impetus to this rapidly evolving engagement.

Naor Gilon, Israel's envoy to India, has said "there is no anti-Semitism in India; this phrase doesn't just exist" as both sides begin official celebrations of the establishment of diplomatic ties 30 years ago.

Anti-Semitism, or discrimination against Jews, has been seen in many parts of the world.

The top Israeli diplomat in India explained, "Jews have lived in India for over 2000 years in total equality and peacefully, and as someone who arrived after serving quite an extensive period in Europe, I was very much surprised at how much love and appreciation there is in India towards Israel."

On January 29th, 1992, India and Israel established full diplomatic relations, and this year both sides will commemorate 30 years of ties to give further impetus to this rapidly evolving engagement.

At a virtual event on Monday, a commemorative logo was launched.

The logo features the Star of David and the Ashoka Chakra and forms the numeral 30, depicting the 30th anniversary of bilateral relations.

Calling relations between India and Israel "exceptional," Israeli envoy to India Naor Gilon said, "relationships did not start just 30 years ago" and "more than 900 Indian soldiers are buried in the land of Israel, those who fought during the First World War as part of the British Indian army, to liberate the area which later became Israel."

He recalled how, in the bed room of David Ben-Gurion, a picture of Gandhi was present, and he saw "Gandhi and India as a sister liberation movement".

David Ben-Gurion was the founding father and first prime minister of Israel.

The role of the Indian soldiers during the 1918 battle of Haifa has been well documented. During the 2018 visit of the then Israeli PM Benjamin Netanyahu, the name of Delhi's Teen Murti Chowk was formally rechristened as Teen Murti Haifa Chowk in his honor.

The 3 statues at the chowk in the heart of Central Delhi belong to the Hyderabad, Jodhpur, and Mysore lancers who were part of the British India forces that helped win the battle of Haifa.

Sanjeev Singla, the Indian envoy to Israel, was also present at the event, and he highlighted how "our two peoples are connected by civilizational bonds that go beyond trade and economic ties.The Jewish people have thrived in India for centuries and, in fact, enriched the composite culture of India. Maharaja Jam Sahib of Nawanagar saved the lives of several Jewish children during World War II by providing them with shelter and taking care of them."

The Indian envoy said the large India-Jewish community forms an "organic link and bridge that continues to grow" between the two sides. There are approximately 85,000 Jews of Indian origin in Israel who are Israeli passport holders. The majority of them are from Maharashtra (Bene Israelis), and relatively smaller numbers are from Kerala (Cochini Jews) and Kolkata (Baghdadi Jews). In recent years, some Indian Jews from the North-Eastern states of India (Bnei Menashe) have been immigrating to Israel.

2022 marks 5 years of strategic partnership which was established during the visit of PM Modi.

He said, "2022 provides us an opportunity to not only look back and take account of the bilateral achievements of the past 30 years, but also the last 5 years when the relationship was put on a qualitatively high trajectory."

As part of the 30-year celebrations, several high-level visits are planned, including one by the new Israeli PM, Naftali Bennett. Both Indian PM Modi and the new Israeli PM met last year, on the sidelines of the Glasgow summit. EAM Jaishankar had also visited the country last year.