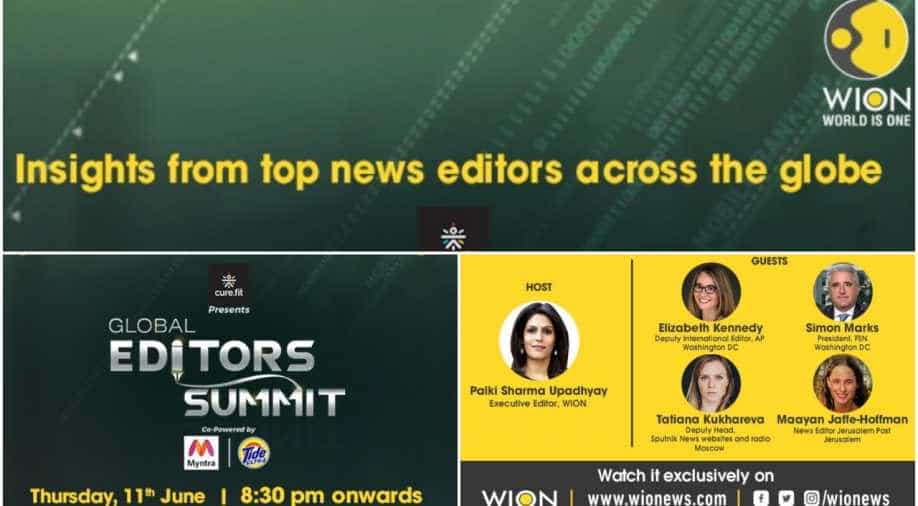 WION is set to host a first-of-its-kind ‘Global Editors Summit’ with editors from top news agencies across the globe. It’s an opportunity for everyone to understand the impact of the pandemic on the media, changing technologies, business models and best practices by news agencies globally.

Think of a newsroom, and all you picture is a small space filled with editors scrambling to attend and deliver meetings, reporters rushing in and out to take interviews, analysts blaring through television sets and the noise of phones ringing.

But amid the coronavirus pandemic, when every activity around the world has come to a screeching halt, newsrooms don't look the same. And they may not -- at least for a considerable amount of time.

Being furloughed, working from home, and having to deal with grim stories by even risking their physical health may also have a pronounced effect on the mental well-being of media persons. But despite these challenges, the one-person news bureaus have worked wonders -- especially the reporters who have braved the wave of coronavirus infections and have travelled far and wide to gather information.

So what are the takeaways from this coronavirus-induced global lockdown? Will things ever be back to how they used to be? Or are the one-man news bureaus the new normal?

WION is set to host a first-of-its-kind ‘Global Editors Summit’ with editors from top news agencies across the globe. It’s an opportunity for everyone to understand the impact of the pandemic on the media, changing technologies, business models and best practices by news agencies globally.

How has the coronavirus pandemic changed newsrooms around the world?

To partake in this virtual summit, all you would need to do is tune into WION on Thursday, June 11, 2020, at 8.30 pm. The broadcast would be streamed on wionews.com and its social media platforms as well.

You can tag us with questions and opinions on the topic by using the hashtag #WIONGlobalEditorsSummit.

FACT OF THE MATTER

These days, dining room tables, study rooms, guest bedrooms and balconies have turned into makeshift newsrooms because, as they say, the show must go on.

And the show is going on with much pomp and show -- without a drop in the quality.

At least 43 per cent of the millennials from the UK and the US have said that news shows have been their most trusted source of information in these testing times.

But far from this, the media time and again became a subject of scrutiny, across the globe.

There have been growing concerns over the treatment of reporters covering the outbreak in some parts of the world. Thirteen journalists working for The Wall Street Journal, New York Times and Washington Post had their credentials revoked by Chinese authorities.

Former acting White House chief of staff Mick Mulvaney had said that the media was overplaying the dangers of the disease as a way to ‘bring down the President’.

In Iran, a few reporters are now facing jail after being detained for challenging official statistics about the outbreak in the country.

In Malaysia, dozens of people, including a journalist, have been arrested for allegedly spreading false information about the virus via social media. There have been similar arrests across Asia, including in India, Thailand and Indonesia.

In India, the government has blamed the media for causing panic among migrant workers, leading to their exodus in the wake of the lockdown.

There have been other collateral damage too. Since the coronavirus pandemic hit India in March, there have been numerous reports about millions of lost media jobs.

A Poynter report says many news outlets are expected to weigh the productivity of their journalists against the cost of office space in the wake of the economic downturn.

"Those big headquarters can be replaced by smaller offices just big enough for occasional meetings and planning. Our journalists can keep doing what they’ve been doing by meeting on Zoom and using local coffee shops if in-person meetings are required."

Big outlets and stations will still return to an office someday, but for smaller houses, the situation looks grim.