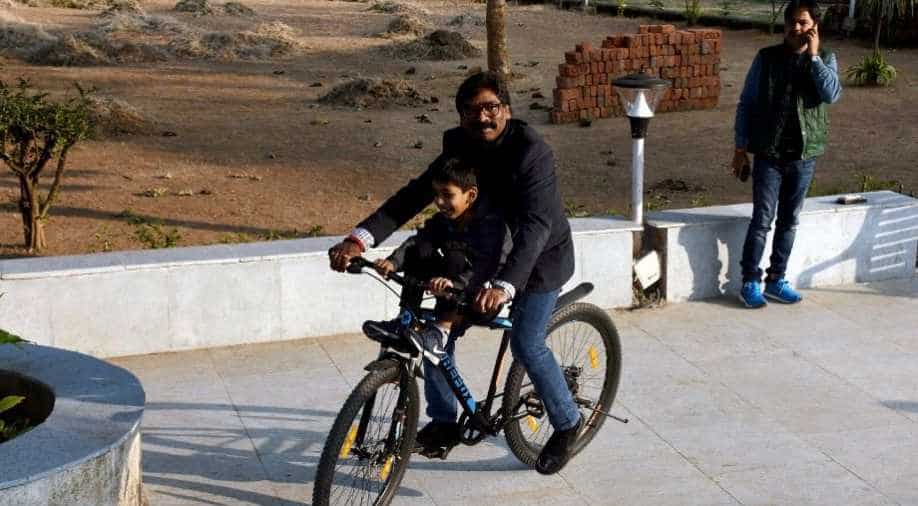 JMM working president Hemant Soren rides a cycle with his son after the victory in Jharkhand assembly election. Photograph:( ANI )

Jharkhand Mukti Morcha (JMM) is currently leading on 28 seats while the Congress-JMM-RJD alliance is leading on 46 seats.

Thanking the voters for the mandate, Soren said, "Today's victory is full of happiness for many but for me, it is also the day to take a vow to fulfil the expectations of the public."

"The time has come to fulfil the goals for which this state was created. I want to thank Lalu ji, Sonia ji, Rahul ji and Priyanka ji and all Congress leaders for all the support and for believing in me," he said, adding that today a "new chapter will begin for the state."

"I want to assure everyone that their hopes will not be broken irrespective of their caste, creed, religion and profession, " Soren said in a press conference held after his alliance surpassed the majority mark.

Jharkhand went to polls for 81 Assembly seats in five phases from November 30 to December 20 and saw 65.17 per cent voter turnout.

The counting of votes began at 8 am today in all the 24 district headquarters amid tight security and is still underway.

Meanwhile, accepting the defeat, BJP president Amit Shah said, "We respect the mandate given by the people of Jharkhand."

"We express our heartfelt gratitude to the people for the opportunity given to BJP to serve the state for 5 years. The BJP will remain committed to the development of the state continuously."