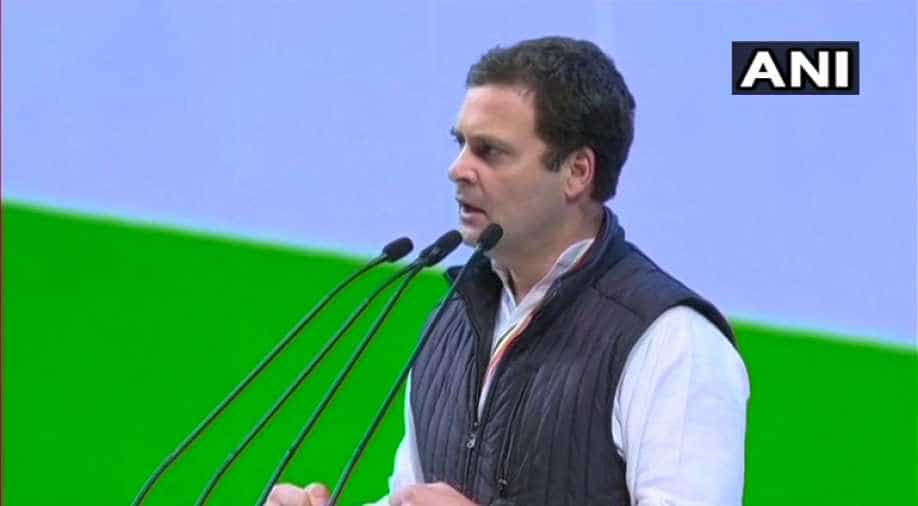 Congress president Rahul Gandhi speaking at the 84th plenary session of the party in New Delhi on Sunday Photograph:( ANI )

Recalling the two warring sides of the epic Mahabharat, Congress president Rahul Gandhi on Sunday said the BJP, like the Kauravas, fought for power, while his party, on the lines of the Pandavas, battled for truth.

Taking the ruling BJP on, Gandhi said the party sought to divert people's attention from issues such as unemployment and farm distress with "fancy events".

"Instead of acknowledging the challenges facing the nation, Prime Minister Narendra Modi diverts our attention from our problems. We are being told that our problems only exist in our imagination," he said.

The BJP-RSS's goal was power, Gandhi stressed in his closing remarks at his party's plenary meeting in New Delhi.

Gandhi held that his party spoke on behalf of the country.

The Congress leader added that the corrupt and powerful today "control conversation" in the country and the "name Modi symbolises the collusion between crony capitalists and the prime minister".

We paid 570 Cr per plane & Modi paid 1670 Cr for the same plane. He paid 1100 Cr more per plane. Forget fighter planes you can’t trust such a man to buy vegetables!!! Modi is not fighting corruption Modi is corruption. #CongressPlenary #ChangeIsNow pic.twitter.com/u7AhEmeJhh

''I don't say it with happiness but the last govt we formed did not stand up to the expectations of the people. The people of the country were let down by us,'' he said.

Today the corrupt and the powerful completely control the conversation in our country. #CongressPlenary #ChangeIsNow

''Congress will take the country forward, but we are humans, we make mistakes. Modi ji thinks he is not human but an incarnation of God,'' he said and added that BJP is the voice of an organisation while the Congress is the voice of a nation, the Gandhi scion said.

Attacking PM Modi on not speaking on the critical issues plaguing the nation, he said PM diverts our attention and jumps from one event to another from ''Gabbar Singh tax to yoga in Parliament'' but never talks about the issues. But, the Congress cannot be stopped from seeking the truth and justice, he said.

Charging the BJP of dividing the nation on the basis of religion and language, he said that they tell Muslims of India who never went to Pakistan and supported this great nation that you don't belong here. They tell the Tamils to ''change your beautiful language'', they tell people of north-east we don't like what you eat, tell women to dress properly, he said.

Without naming the BJP president Amit Shah, he said they will accept a man accused of murder as the President of the BJP, but they will never ever accept the same in the Congress Party because they hold Congress in the highest regard.

Raking up PNB bank fraud in which diamond czar Nirav Modi is accused of Rs 13,000 crore loot, he said ''You can steal Rs 33,000 crore from the banks and the BJP government will protect you. Finance Minister will go silent because he and his daughter work for crony capitalists,'' he said.

Accepting the organisational shortcomings in the Congress party, the Congress president tried to assuage the senior party leaders on the occasion and said ''We have to change Congress. There is a wall between our leaders and workers. My first task will be to break that wall. I will consult senior leaders to destroy that wall with love,'' he said.

''BJP has spread fear. People from the press are scared, for the first time we saw four Supreme Court judges running to the public for justice.There is a difference between the RSS and the Congress. We respect the country's institutions whereas they want to finish them.They only want one institution, that is RSS,'' Gandhi said.