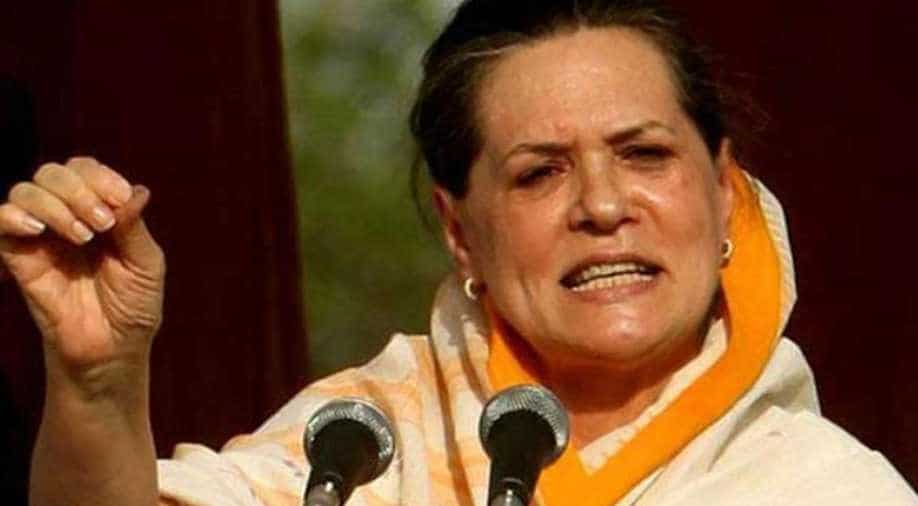 Launching a scathing attack on the Modi government, former Congress president Sonia Gandhi today accused it of "betraying" the people by not keeping its promises and alleged that corruption had taken "deeper roots" since it came to
power.

In her address to the 'Jan Aakrosh' rally at Ramlila Maidan here, the UPA chairperson alleged that the government has left no stone unturned in undermining institutions and targeting political rivals by misusing central agencies.

She also made a reference to the "serious crisis" that had gripped the top judiciary, saying it had never happened before.

Sonia Gandhi claimed all sections of the society were unhappy and angry with the government as none of the promises made to them were fulfilled.

In her 10-minute address, she said unlike truth prevailing in the past, today falsehood, hatred and violence were ruling the roost.

The Congress leader cautioned the people to remain alert in the "sensitive" phase that the country was passing through.

"What happened to Modi ji's slogan 'Na khaunga, na khane dunga' (would not take bribes, nor let anyone do so) as the roots of corruption have become deeper under his watch," she said.

Sonia Gandhi charged the government with muzzling dissenting voices and dividing communities with an eye on electoral gains.

"For all of us, the country is passing through a sensitive phase and we need to take it seriously. That is why I want to tell you to remain alert," she said, adding that the people should strengthen their voice along with party president Rahul Gandhi to fight divisive forces.

"We will fight unitedly the directionless, anti-people Modi government, which has made false promises and betrayed the people," she said.

The former Congress chief said, "I am confident that the voice raised at the rally at the historic Ramlila Maidan will resonate across every household and our fight will be successful in the days to come."

She said, "This government has not left any stone unturned in undermining constitutional institutions. Political rivals are being targeted through government agencies. "The media cannot play its role and it is being stopped from doing so," she said, adding institutions were built with a lot of hard work in the last 60-65 years and need to be strengthened.

"All this is being done at the behest of an organisation, which follows a certain mindset," the Congress leader said, in an apparent reference to the RSS, the BJP's ideological mentor.

Urging people to unite under Rahul Gandhi's leadership, Sonia Gandhi said, "We will fight Modi ji and his colleagues who are weakening the foundations of the Constitution for their personal interests.

The chairperson of the Congress Parliamentary Party said leaders of the party in the past sacrificed everything as they wanted to create an India based on the values of truth, love and non-violence.

"But what has happened in the last four years is there before all of us. I feel pained to see that falsehood, hatred and violence is rampant in the country today instead of truth, love and non-violence.

"Those who raise voice for justice become victims of Modi government's anger. They (the BJP) take their majority in the Lok Sabha as a licence to work at their whims and fancies. They think it is their right to muzzle voices at every level," she added.