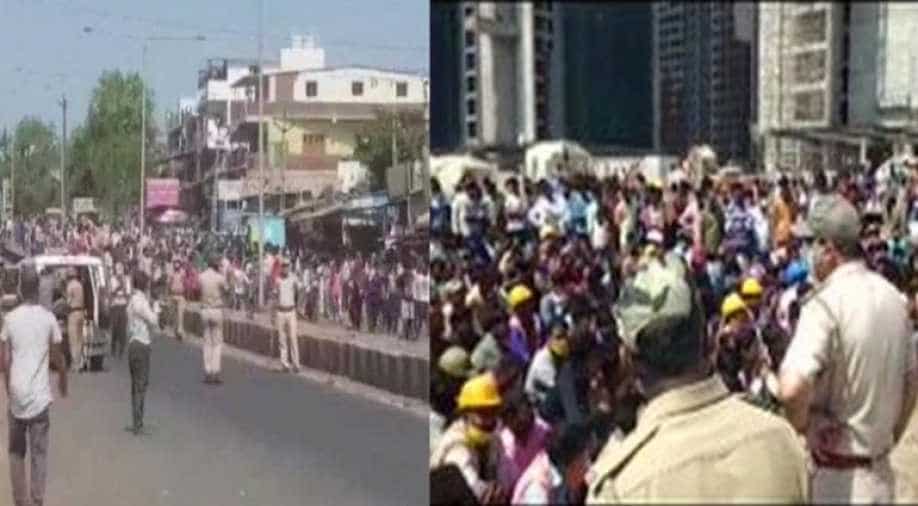 More than 500 workers hurled stones at the police trying to enforce the lockdown rules. The clash took place in Surat on Saturday.

For the second consecutive day, hundreds of migrant workers clashed with the in Gujarat police. Group of migrant workers have been protesting against the lockdown, and demand that the authorities make arrangements to send them to their hometown.

More than 500 workers hurled stones at the police trying to enforce the lockdown rules. The clash, that took place in Surat on Saturday, comes after a similar protest was staged in Ahmedabad on Friday.

Protesters took to the streets in the city of Surat on Saturday, a day after residents in Ahmedabad clashed with paramilitary forces.

More than 500 workers employed in industries in the Hazira belt, staged a protest demanding that the authorities send them back to their hometowns. The protestors are mainly from Bihar and Uttar Pradesh.

Police had to use teargas to disperse the crowd. Nearly 60 migrant workers were arrested on the charges of unlawful assembly and rioting. The police is working on identifying the rest of the people who were involved in organising the protest.

“We told them that a large number of workers have [already] been sent to their home states by the government, and similar arrangements would be made for them too,” Inspector H.R. Brahmbhatt, based at Ichhapore police station, told a media organisation.

However, the protestors allegedly did not listen to the police and pelted stones at the police.

This is not the first time Gujarat has seen protests from migrant workers during this lockdown. Earlier in the week, almost 1,000 migrant workers staged a protest in the village of Vareli.

The violence comes as the number of reported coronavirus cases in India climbed to 59,662, with 1,981 deaths.