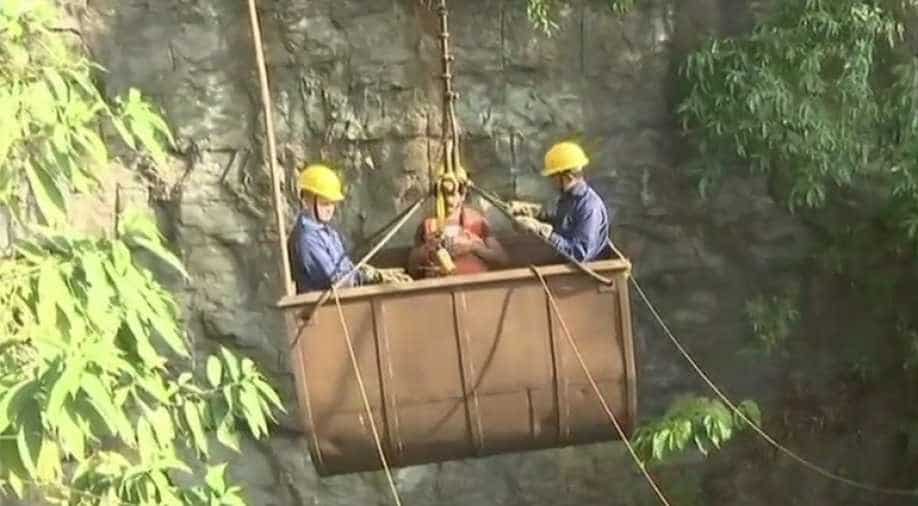 The depth of water from the surface till the bottom of the pit is expected to be over 150 feet, Navy officials said.

Indian Navy divers on Monday again entered the flooded mine in Meghalaya, where 15 miners are trapped, and said the search would be feasible only after the water level inside the shaft is reduced to a safe diving limit of 30 metres.

On the 18th day of the operation, the Navy divers stayed inside the shaft for three hours with a hi-tech gadget, Under Water Remotely Operated Vehicle (UWROV), and found visibility to be very poor, only one foot, operation spokesperson R Susngi said.

"The Indian Navy suggested that the administration dewater using pumps to reduce the water level inside the mine shaft till about 30 metres (98 feet) or within safe diving limit before they commence diving," Susngi said.

According to the Navy, all precautions are being taken to ensure that divers do not suffer from decompression sickness, which is usually experienced in a compressed environment as that of the mine in Lumthari village.

Fifteen miners are trapped inside a 370-foot-deep illegal coal mine in Meghalaya's East Jaintia Hills district since December 13 after water from a nearby river gushed in, puncturing the mine wall.

The depth of water from the surface till the bottom of the pit is expected to be over 150 feet, Navy officials said.

Six divers from the Navy and the NDRF went down the shaft of the mine Sunday and spent around two hours to trace the miners but could not detect anything.

However, Susngi said, during their three-hour stay inside the shaft on Monday, the divers found some wooden structures and a horizontal hole, commonly termed as "rat hole", with coal at its mouth.

The site is being cleared for the Odisha Fire Service to start pumping water from the main shaft, he said.

At least 10 high-powered pumps from the Odisha Fire Service, along with 21 personnel, have reached the spot Sunday.

There are at least 80-90 other abandoned mine shafts that are full of water near the affected mine.

Ace mining mishap expert Jaswant Singh Gill suspected that the mines in the area are inter-connected and the theory was also agreed to by locals.

A submersible pump from the Coal India Limited (CIL), which was expected to reach the mine by Sunday night, is yet to arrive till last reports came in.