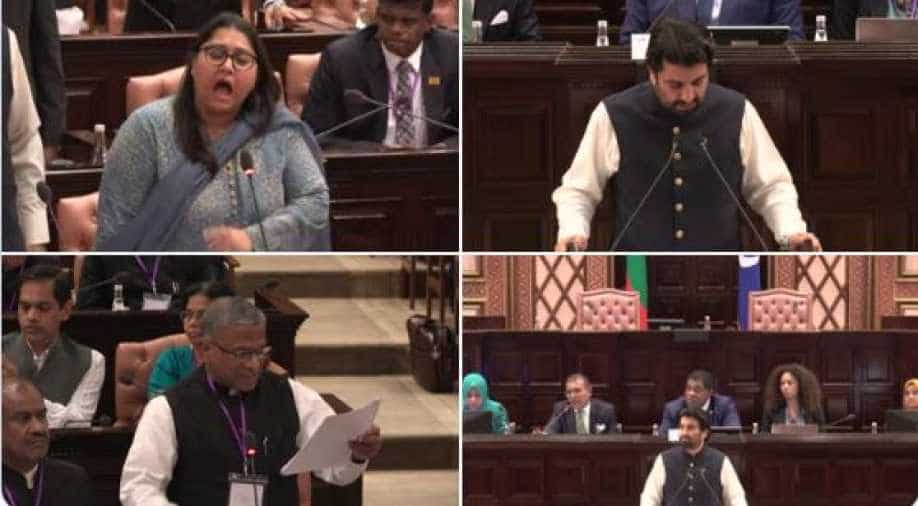 In response to Suri's remarks, Narayan Singh said, "We strongly object to raising of the internal matter of India in this forum. We also reject the politicisation of the forum by raising issues which are extraneous to the theme of the summit."

A major argument broke between India and Pakistan delegates inside the Maldives Parliament on Sunday after Pakistani delegates raised Kashmir on a forum meant for sustainable development goal even as hapless speaker of Maldivian Parliament Mohamed Nasheed tried to control the situation in vain.

"We cannot ignore the situation of Kashmiris who are facing oppression, They are facing injustice, "Suri said in his remarks drawing a strong reaction from India.

Speakers from S Asia were discussing SDGs. Pak raised Kashmir. India objected to raising of extraneous issues. New Delhi pointed out that cross border terrorism is the biggest issue for peace and security of the region. https://t.co/qvQsKgJKRL

In response to Suri's remarks, Narayan Singh said, "We strongly object to raising of the internal matter of India in this forum. We also reject the politicisation of the forum by raising issues which are extraneous to the theme of the summit."

Calling Pakistan to "end cross border terrorism and all kinds of state support to the same", Singh said this need to be done "in the interest of regional peace and stability. Terrorism is the biggest threat to the entire humanity today. This forum and summit is meant to discuss SDGs"

Singh's remarks did not go down well with the Pakistan delegates who hit back.

"SDGs for women and youth, nothing can be achieved without human rights. The atrocities being meted out on Kashmiris.." said Pakistan Senator Ain Marri who was interrupted by Maldives Speaker Nasheed.

Even as the Speaker interrupted Ain Marri, India's deputy speaker responded to her by saying "A country that perpetrated a genocide of its own people" has " no moral right" to speak.

An angry Marri tried to interrupt Singh's speech again by saying "Pakistan is not a purveyor of terror" to which Deputy speaker said this meet is for SDG discussion.

The speaker of the Maldives Parliament had to scream multiple times to maintain civility but the ruckus continued for a considerable time before he declared lunch break.