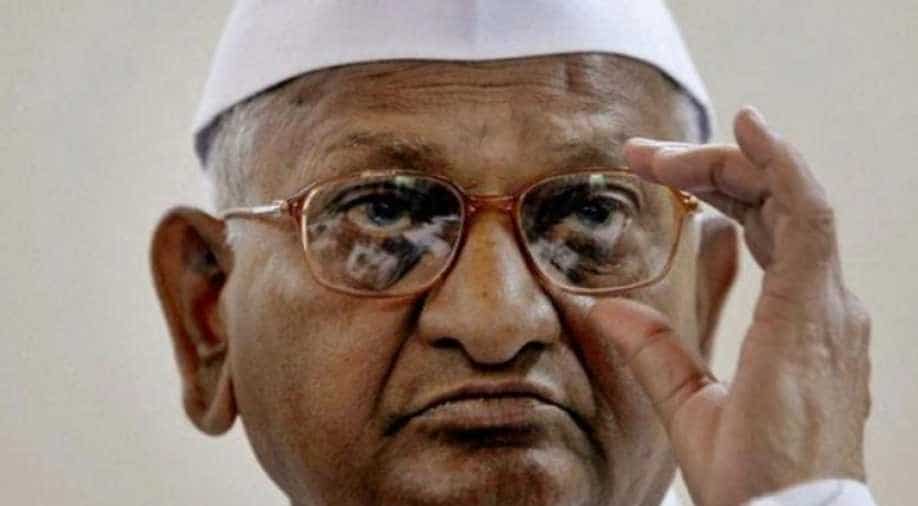 In his letter to Chief Minister Devendra Fadnavis, dated January 28, Hazare said he would launch the agitation in his village Ralegan Siddhi in Ahmednagar district of Maharashtra.

Social activist Anna Hazare has announced that he would launch a hunger strike from Wednesday over the "non-fulfilment" of assurances by the Centre and the Maharashtra government on the appointment of Lokpal and passage of Lokayukta Act in the state respectively.

In his letter to Chief Minister Devendra Fadnavis, dated January 28, Hazare said he would launch the agitation in his village Ralegan Siddhi in Ahmednagar district of Maharashtra.

Meanwhile, the Fadnavis Cabinet Tuesday decided to bring the office of Maharashtra Chief Minister under the jurisdiction of Lokayukta.

Maharashtra Minister Girish Mahajan, who has been acting as an emissary between the government and the activist, urged Hazare to cancel the agitation, claiming that almost all the demands made by the activist have been fulfilled.

Hazare, however, said he would not call off the agitation till the Lokayukta Act becomes a reality.

Apart from the appointment of Lokpal at the national level and Lokayukta in states, Hazare has been demanding implementation of the Swaminathan Commission recommendations and some electoral reforms.

"It has been five years since the Lokpal Act was passed. Yet the Narendra Modi government has not appointed Lokpal...Lokayukta Act has not been passed in Maharashtra for four years," Hazare observed in his letter dated January 28.

The activist said the chief minister had mediated when he had launched the agitation at Ramlila Maidan in Delhi in March last year.

Hazare said he had withdrawn that agitation after the central government had assured in writing that it would fulfil the demands.

"Nine months have passed, yet the demands have not been fulfilled. Hence, I will be on hunger strike in my village Ralegan Siddhi on January 30," Hazare said in the letter.

Mahajan urged Hazare not go ahead with the agitation saying almost all the demands he had raised were fulfilled.

"His first demand was implementing Swaminathan Commission recommendations, that farmers should get 1.5 times MSP. I think that demand has been fulfilled," Mahanjan told reporters here.

Speaking in Ahmednagar, Hazare welcomed the government's decision to set rolling the process to appoint Lokayukta.

"I thank them on behalf the people for taking the decision to the appointment of Lokayukta through the Constitutional process. But that does not mean I will not stage hunger strike tomorrow. The agitation will go on until the act is in place," Hazare added.

In Delhi, an eight-member search panel formed to select members of anti-corruption ombudsman Lokpal Tuesday held its first meeting, nearly four months after it was set up by the Modi government.

The committee, headed by former Supreme Court judge Ranjana Prakash Desai, is understood to have discussed modalities related to the appointments of the chief and members of Lokpal.