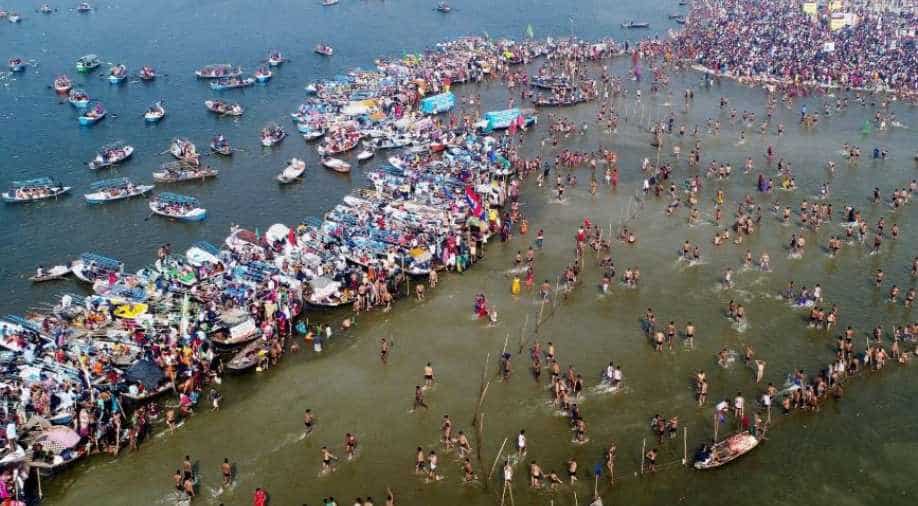 The Ambassadors of about 71 countries have already witnessed the preparations for this grand event.

The setting up of a new city in the huge Mela area, has 250 kilometre long roads and 22 pontoon bridges which will make it the largest temporary city of the world, informed Uttar Pradesh government on Monday while sharing details of the Prayagraj Kumbh.

It also informed that for the first time, the Mela area is being brightened up by installing over 40,000 LED lights there. UNESCO has already included Kumbh in the list of "Intangible Cultural Heritage of Humanity".

Uttar Pradesh government expects over 5000 NRIs to visit the Kumbh apart from people of over 6 lakh villages of India along with the overseas devotees will participate.

It is also for the first time in the last 450 years that the devotees coming to the Kumbh will have an opportunity to pray at 'Akshay Vat' and 'Sarasvati Koop'.

"The Kumbh is organised at Triveni Sangam, but it is related to entire Prayagraj area. Keeping this in view, the state government has beautified all the places directly or indirectly linked to the Kumbh. For convenience of devotees and tourists visiting the Kumbh, the facility of reaching there by air, road and river has been made for the first time", read a statement issued by the state government.

The state government had earmarked an amount of Rs 2800 crore for Kumbh Mela-2019 along with the various projects of stable development.

Besides, works of stable development are being carried out at Kumbh Mela and Prayagraj with a total amount of Rs 4300 crore from other budget.

During 2013 Kumbh held in Prayagraj an amount of Rs 1,214 crore was spent. Ambassadors of about 71 countries have already witnessed the preparations for this grand event.

They have unfurled the national flag of their countries on the bank of Triveni in Kumbh Mela area. The state government also opined that the representatives of 192 countries will be visiting Kumbh in the month of February.

In order to boost security, the Kumbh Mela Area has been brought under the surveillance of Integrated Control and Command Centre and CCTV Cameras.

Earlier on January 4, the Air India has announced new flights to Prayagraj from Delhi, Ahmedabad and Kolkata.

These flights will help facilitate the movement of passengers during the Kumbh Mela 2019.

The flights are scheduled to operate from January 13 to March 30.

The Ardh Kumbh Mela will commence from January 14 to March 3 at the Triveni Sangam - the holy confluence of river Ganga, Yamuna, and Saraswati.

Thousands of devotees are expected to arrive in the city to take a holy dip in Triveni Sangam.