Kerala violence is the pretext; 2019 election is BJP's goal 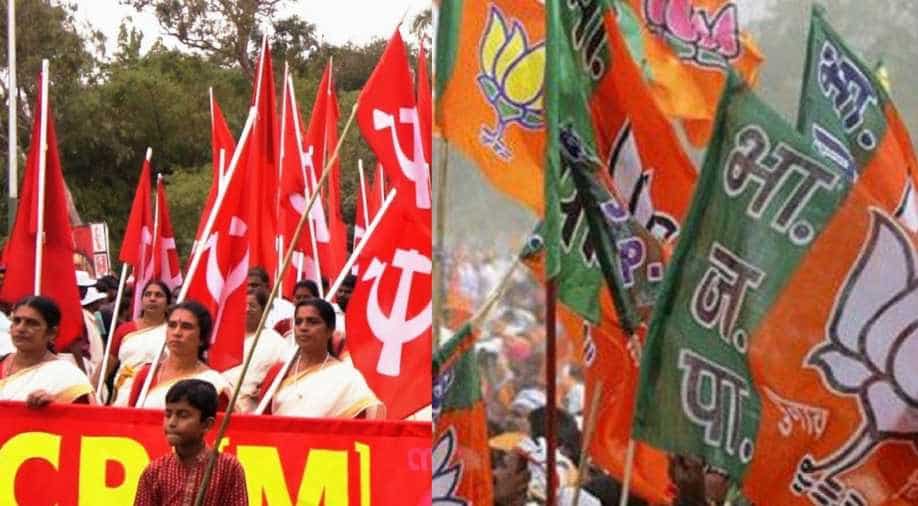 An aggressive campaign by BJP in Kerala against the killing of its workers is not an exercise in isolation. It is a campaign for 2019 which BJP is taking through states in which it had no historic presence. In every state, slogans have differed but the aim has been the same and that being expansion of the organisational structure of the party. The political aggression is high but it isn’t new as the exercise started immediately after Lok Sabha elections in 2014.

BJP after its massive win in general elections started to disrupt existing political equations in the states. Instead of having an alliance with a local party in Haryana, BJP chose to go alone and formed the government. This story was repeated in states, such as Assam, Jammu and Kashmir and West Bengal. In states like Assam, BJP tasted success and in West Bengal, it was able to expand it voters base but electorally it got trounced.

How BJP expects to gain where more than 50 percent of the population is Christian and Muslim.

In both situations, BJP did get away by gaining something. Similarly, BJP wants to push the final frontier in Kerala as it did in JK and Assam, the two states where it was thought impossible for BJP to gain a foothold. BJP broke regional leaders and tapped into anxieties which cut across caste in the states. The exception being Kashmir valley where BJP despite its best effort could not open an account but instead swept Jammu.

The question then arises is how BJP expects to gain where more than 50 percent of the population is Christian and Muslim. BJP has been able to evolve a working relationship with the church in Goa but it still has a substantial Hindu population to bank upon. Kerala is a laboratory and a test case for BJP. In Kerala, not only BJP will have to reset and alignment between Congress and CPM, but will have to push the communist party to the margin. In this case, it is directly competing with CPM for the affections of the Ezheva community.

The killings are not new. Kannur has been known as the killing field of Kerala. The activism for it at the national level is new. BJP has decided to lend national heft for regional gains. This has happened because BJP feels that Hindutva blended with OBC and Dalit politics will yield electoral results in the state.

It can also be explained in the context of ‘Sanskritisation’ which OBCs have undergone throughout India and have come to represent the core Hindutva politics in the North and the West. Most of these communities in 1960, 70s and 80s consolidated under socialist parties under the banner of ‘Kisan’ politics, directly pitching itself against the Congress Party.

Even if campaigns in West Bengal or Kerala don’t yield electoral numbers, BJP, at least, gets to dominate the political discourse and expand the party.

By end of the 1990s, the consolidated socialist front, however, fragmented into caste-based parties throughout India. BJP today dominates this political landscape. This development coupled with the fragmentation of Dalit votes has benefitted BJP immensely. Even in Kerala, under the rubric of Hindutva, BJP is actively pursuing backward and Dalit sections despite the antagonistic relationship it shared with these communities both at the social level and cultural level.

It is for this reason, Yogi Adityanath was the first person from north India to grace the yatra started by BJP President Amit Shah.

Similar, disruptions will continue in other states as well. BJP has already occupied the Opposition’s space in Orissa. In Telangana, it doesn’t want to move fast lest TRS allies with the Opposition. It is for this reason that despite political upheaval in Tamil Nadu, BJP is trying its best to stabilise the government.

The North Indian states are already saturated. BJP intends to come to power by using the states which rejected them during 2014. It is for this very reason states like West Bengal, Orissa, Assam, Telangana, Tamil Nadu and Kerala have become very important. BJP knows that in 2019 the road to Delhi will need to be paved in from South and East India and not North.

For the Opposition, the job has become tougher. BJP has the movers advantage. They never expected BJP to continue into the election mode even after the Lok Sabha elections. BJP is making every election count. It tasted royal defeats in Bihar and Delhi. It realises that it takes very little to diffuse political momentum in a country like India. So even if campaigns in West Bengal or Kerala don’t yield electoral numbers, BJP, at least, gets to dominate the political discourse and expand the party.

This is what BJP intends to do in Kerala. It is making every state election count to become the dominant party in the country, replacing Congress as the biggest and largest party with completely different ideological underpinning.