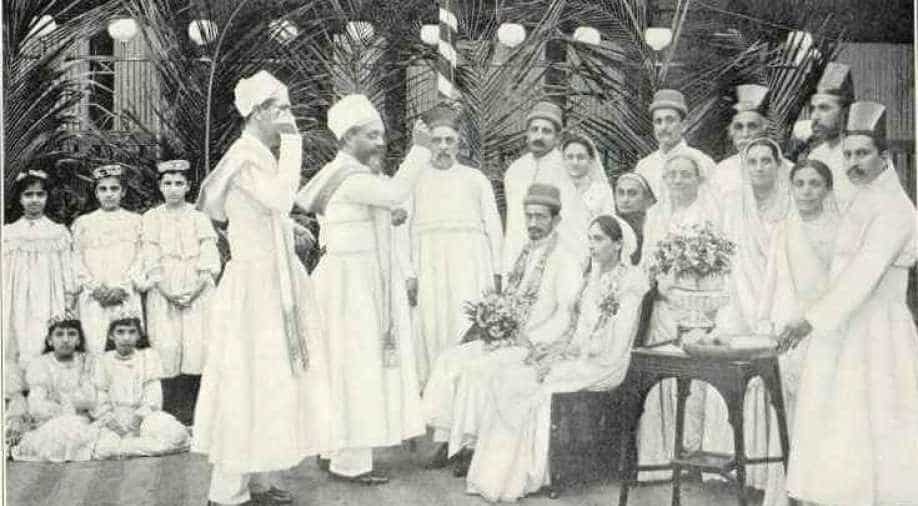 Critics say the scheme amounts to selective procreation and reinforces orthodox Zoroastrians views that Parsis should only have children with each other. In photo: A Parsi wedding in Mumbai, 1905. (Image source: Wikimedia Commons) Photograph:( Others )

Some 120 children have been born through the "Jiyo Parsi" fertility initiative since it was launched four years ago in a bid to help reverse a dramatic decline in India's Zoroastrian population.

The programme, which provides Parsi couples with free in-vitro fertilization treatment, has been hailed a success by many in the influential community.

But critics say the scheme, which has also seen the launch of an advertising campaign effectively damning Parsis that are not having children, amounts to selective procreation and reinforces orthodox Zoroastrians views that Parsis should only have children with each other.

For Aspi and Persis Kamakhan -- from Mumbai, where most of India's 57,000-odd Parsis live -- it represented a unique opportunity to have a child after trying to conceive for twelve years.

"We had lost all hope but Jiyo Parsi was a big blessing and completely changed our lives," 38-year-old Persis, now mother to a 3-year-old girl, told AFP.

Parsis are Zoroastrians who first arrived in India more than 1,000 years ago after fleeing persecution in Persia. They follow the teachings of the ancient Prophet Zoroaster and worship in fire temples.

The group flourished under British colonial rule and became one of India's wealthiest and most powerful communities, boasting a number of famous industrialists including the Tata, Wadia and Godrej families.

But their population has been dwindling for decades. Across India, where the majority of the world's Zoroastrians reside, their numbers have halved since 1940. At the last census, in 2011, 57,264 Parsis were recorded in India.

The population slide has led to warnings that the community's very existence is under threat. So in 2013, the Indian government started "Jiyo Parsi", meaning "Live Parsi" in Hindi.

"Jiyo Parsi has two fundamental purposes -- first to arrest the decline of Parsis, and second to increase their population," Katy Gandevia, who counsels prospective parents on the programme, told AFP.

The scheme provides financial assistance ranging from 50 to 100 percent of the cost of IVF depending on the combined annual salary of the couple, a lifeline for those desperate for a baby but short of funds.

It is run in partnership with the Bombay Parsi Punchayet, Mumbai's leading Parsi organization, a community NGO called the Parzor Foundation and the Tata Institute of Social Sciences.

For Shernaz Cama, the founder of Parzor, every baby born offers a glimmer of hope that the group will survive long into the future.

"We have had 120 births in four years. The programme has increased the number of Parsi babies born every year by 18 percent," she told AFP.

Largely well-educated and well-off, Parsis have tended to marry late, or not all, and have smaller families than other Indian communities, factors that have been blamed for contributing to the low birth rate.

Pressure from conservatives for Parsis to marry within the closed community has reduced the pool of possible partners and led many towed out of the traditionally fold, demographers also say.

Reformists, meanwhile, blame a rule that bars the children of women who marry outside the community from places of worship.

By comparison, if a man weds outside the community then his children are still considered Parsi.

"Welcoming these children into the fold should have been the most obvious solution to increasing community numbers. Instead, these children and their parents are being shunned," Simin Patel, a Parsi who opposes the programme," told AFP.

The historian, who writes an online blog about Mumbai entitled "Bombaywalla", accuses the government of supporting a programme of "selective racial breeding".

"The Jiyo Parsi scheme is a telling example of how the theories and programmes of eugenics are still being practiced in the present day," she said.

Some in the community have also criticised recent posters advertising the programme's second phase, accusing them of being elitist, patriarchal and of stigmatizing childless women.

One poster shows a man sitting on a chair with the caption: "After your parents, you'll inherit the family home. After you, your servant will." Another reads: "Be Responsible - don't use a condom tonight."

"These ads reflect a sense of entitlement, are regressive and instead of empowering Parsi women, drag us back into the dark ages," Pervin Sanghvi, a Parsi from Mumbai, told AFP.

Two Parsis die on average every day in Mumbai. For every four passing away, only one baby is born, according to Pearl Mistry, Jiyo Parsi's coordinator.

The numbers suggest the programme itself will not be enough to save the community.

"Couples say that Jiyo Parsi is a ray of hope at the end of a long and dark tunnel and we cling to that," said Mistry.