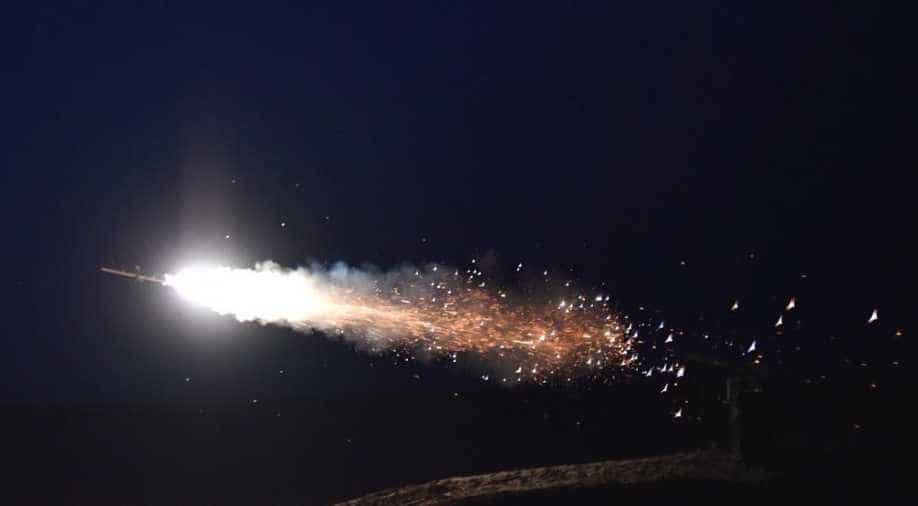 Picture of the successful trial of the Man Portable Anti Tank Guided Missile (MP-ATGM) being developed for infantry troops of the Army. Photograph:( ANI )

The Defence Research and Development Organisation carried out the trial of the missile with two-three km strike range on Wednesday night in Rajasthan desert.

India has successfully carried out the trial of the Man Portable Anti-Tank Guided Missile (MP-ATGM) being developed for infantry troops of the Indian Army.

The Defence Research and Development Organisation (DRDO) carried out the trial of the missile with two-three km strike range on Wednesday night in Rajasthan desert.

This was the fourth overall development trial of the MP-ATGM which is being developed for the infantry troops against the enemy tank regiments.

“Both the missiles hit their target with complete precision and all the desired mission objectives were met successfully,” DRDO officials said.

The missile has been tested at all ranges including maximum strike range which is around two-three kms.

The missile is critical for the Indian Army as it has a requirement for more than 50,000 of these anti-tank missiles. This comes after India on Tuesday successfully carried out the third trial of Pinaka guided missile at Pokharan range.

Two trials of Pinaka guided extended range rockets were conducted on Monday. Both the rockets hit their targets at 90-km range.

Pinaka is a multi-barrel rocket launching system developed by the DRDO, for the Indian Army with a range of around 40 km. To meet the emergency requirement of the Army, the Defence Ministry had recently cleared the acquisition of 5,000 Milan 2T ATGMs for the Force.