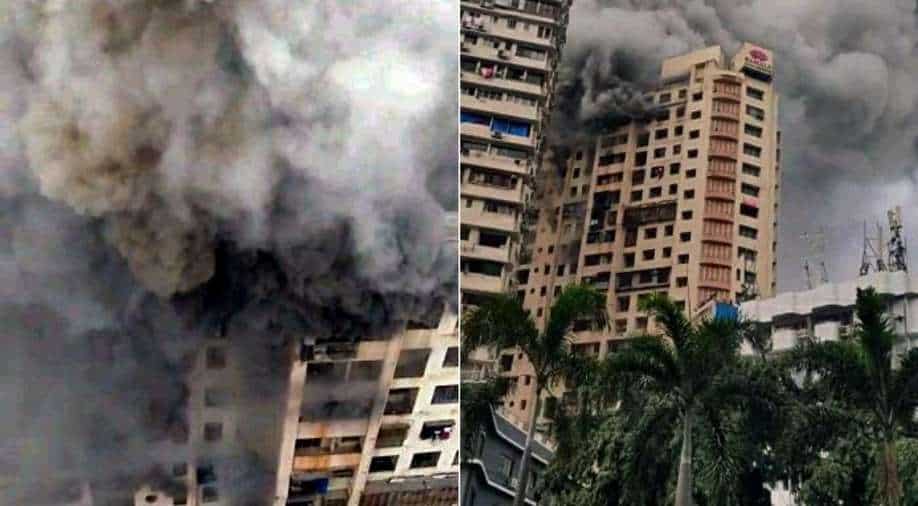 A fire broke out at a 20-storey Kamala building in Mumbai. Photograph:( ANI )

At least six people were killed and more than 20 were injured in a building fire in an Indian city Mumbai on Saturday (January 22), an official of the Brihanmumbai Municipal Corporation (BMC) informed.

The incident happened at dawn when a major blaze engulfed the 18th floor of a building in Tardeo, South Mumbai. The densely populated city is in the western state of the country, Maharashtra.

Emergency services were alerted by people in neighbouring buildings when they noticed the fire at the top part of the 20-storied Kamla Building at around 7.30am (local time).

News agencies reported that the Mumbai Fire Brigade (MFB) rushed with 13 fire tenders as the flames quickly spread to the two upper floors sparking panic among the building residents.

The MFB managed to rescue at least 23 injured persons from the inferno that raged in the top three floors, and the firemen continued to battle the blaze in the afternoon.

As per reports, the injured persons were rushed to various private and public hospitals and seven were given first aid and allowed to go. The remaining 16 with grievous burns of various degrees, have been admitted to different hospitals.

BMC Disaster Control said that four critically injured people succumbed to their burns after two deaths were reported earlier. They also informed that another five are still critical.

President of the country Ram Nath Kovind condoled the deaths as he said, "Saddened to learn about the fire incident in a building in Mumbai. My deepest condolences to the families who lost their loved ones in this unfortunate accident. I wish the injured a speedy recovery."

Indian Prime Minister Narendra Modi expressed grief over the incident and announced on Twitter that ex-gratia assistance of Rs 2 lakh would be provided to the family members of each deceased from the Prime Minister's National Relief Fund (PMNRF), and the injured would be given Rs 50,000 each.

An ex-gratia of Rs. 2 lakh each from PMNRF would be given to the next of kin of those who have lost their lives due to the building fire in Tardeo, Mumbai. The injured would be given Rs. 50,000 each: PM @narendramodi

Maharashtra Tourism Minister Aaditya Thackeray visited the site and said the state government will provide a compensation of Rs 5 lakh to the family members of each deceased.

Devendra Fadnavis, who is the Bharatiya Janata Party leader of the opposition, condoled the deaths and said he was shocked to learn that some nearby hospitals refused to admit the injured leading to a spike in the deaths.

"If this is true, then the state government and BMC must fix the responsibility for the deaths and take action against those responsible," demanded Fadnavis.

If it is true then, BMC & State administration should fix the responsibility for these deaths & take action against those responsible.#MumbaiFire #tardeo