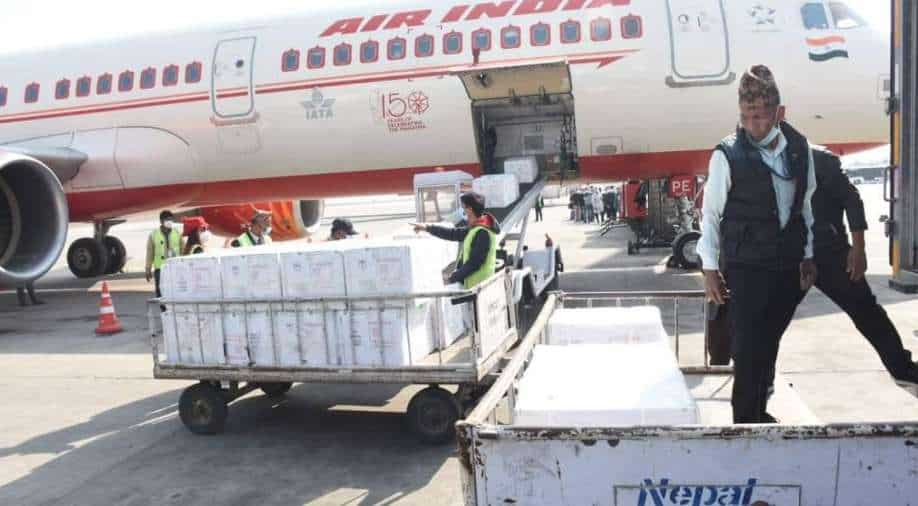 One million doses of made in India vaccines purchased by the Government of Nepal arriving at Tribhuvan International Airport in Kathmandu (file picture) Photograph:( Twitter )

Of these vaccine doses, 71.25 lakh were supplied as gift, and 393.04 lakh commercially. The countries that have got India's vaccines both developed and developing countries, from Africa to the Caribbean to ASEAN and in the neighborhood.

India has supplied 464.29 lakh made-in-India Covid vaccines to 47 countries as of Thursday, an outreach that has won genuine goodwill for New Delhi in many parts of the world.

Of these vaccine doses, 71.25 lakh were supplied as gift, and 393.04 lakh commercially. The countries that have got India's vaccines both developed and developing countries, from Africa to the Caribbean to ASEAN and in the neighborhood.

On Wednesday, India-made vaccines reached Canada, with the country getting 500,000. The Pune-based Serum Institute of India will be sending 1.5 million more doses of Covishield vaccine. In a tweet, India's envoy to Canada Ajay Bisaria said, "India is proud to support Canada’s vaccination programme as a strategic partner."

One of India's significant outreach efforts has been to CARICOM, or Caribbean countries such as Barbados, Dominica, St Lucia, St Kitts & Nevis, St Vincent & Grenadines, and Antigua & Barbuda.

Lauding India's generosity, Antigua and Barbuda Prime Minister Gaston Browne said, "PM Narendra Modi has demonstrated perhaps the most significant of benevolence, kindness and certainly of empathy" that "we would have seen in the recent times, compared to any act of any other leader globally".

"I have to admit that this is easily one of the most notable acts of benevolence that we have seen in the last 100 years," he added.

Other Caribbean leaders also thanked India, with Barbados Prime Minister Mia Amor Mottley tweeting, "PM Modi @narendramodi made it possible for more than 40K persons in Barbados and tens of thousands elsewhere, to receive their 1st dose of COVISHIELD via #VaccineMaitri before receiving his. A genuine demonstration of generosity. Thank you and we wish you continued good health."

Caribbean countries included a special thanks to India in a resolution adopted by the Organisation of American States (OAS) - a group of 34 countries including the US, Canada, Brazil, Mexico and Argentina.

At a time of vaccine nationalism, CARICOM's envoy to the OAS permanent council, Ambassador Ronald Sanders said, "India has demonstrated that it is a caring nation and is an example to the world in international cooperation at a time of global crisis. Further, India has not sought to extract any conditions for its generosity to countries that have no vaccines. India will be remembered by the Caribbean with great gratitude."

Indian High Commissioner accredited to the CARICOM Secretariat Dr KJ Srinivasa explained that the statement seems to echo the general sentiments of the CARICOM region. He told WION, "India’s role as the first responder during crises and as the “pharmacy of the world” are now recognised throughout the region and this #VaccineMaitri will go a long way in further consolidating India’s role as a world leader."

Eleven countries have got India-made vaccines under the COVAX facility. Ten of them are from Africa-- Ghana, Ivory Coast, Congo, Angola, Nigeria, Kenya, Lesotho, Rwanda, Senegal, Sudan and one from ASEAN--Cambodia.

All of India's neighbors, barring Pakistan, have been supplied with vaccines by New Delhi. In fact, Afghanistan, Maldives, Nepal and Bangladesh began their vaccination drive using India-made vaccines.

Last week, when Afghanistan started its vaccination drive with healthcare workers and members of the Afghan military, President Ashraf Ghani said, "India, the world's largest democracy and the largest producer of vaccines, not only provided the house of Parliament of Afghanistan and the dams that are the pride of this country, but also partners with us in terms of securing our lives and livelihood."

India had started its mega domestic vaccination in January and since then more than 1.66 crore vaccine doses have been administered.