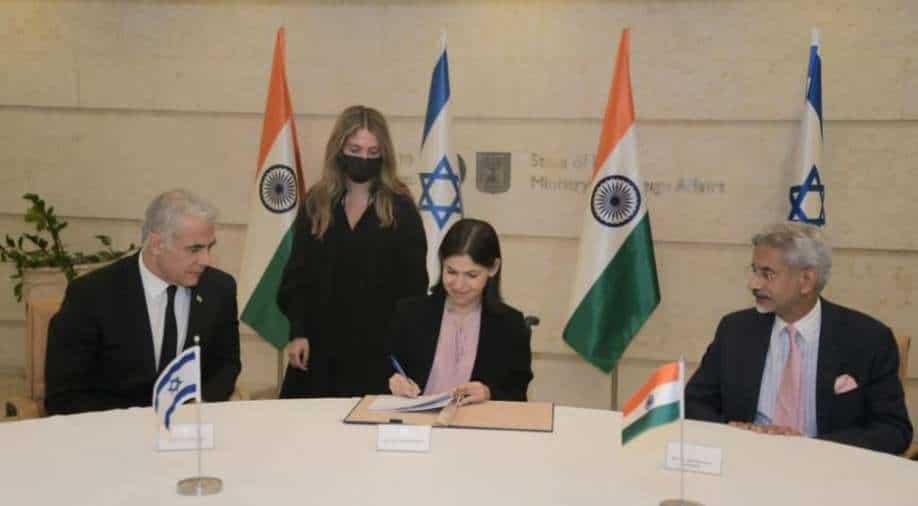 India and Israel have agreed to start the free trade agreement negotiations from November.

India is Israel's third-largest trade partner in Asia and seventh largest globally. Both countries currently have $4.14 billion trade (April 2020 – February 2021), a figure that doesn't include the defense trade which has been increasing.

Sitting alongside Israeli FM Yair Lapid, EAM Jaishankar said, "Our officials have agreed on the resumption of the India Israel free trade negotiations starting...talks will start in November. They are very confident that they will be able to conclude the negotiations by next year. It is something we very much look forward to"

At the meet, EAM said, "I know, in principle we have agreed on mutual recognition of our vaccination certification process. And while we are working that out, in the interim Israel would all people, having Covishield vaccines to travel to Israel"

Israel's energy minister Karine Elharrar officially signed the agreement on her country's accession to the International Solar Alliance in the presence of Israeli Foreign minister Yair Lapid and Indian External Affairs Minister Dr S. Jaishankar. ISA aims to harness Solar energy to reduce dependence on fossil fuel.  It was launched by Indian PM Modi and the then French President Francois Hollande at the Paris climate summit in 2015.

India's external affairs minister Dr S Jaishankar is in Israel currently, his first in current capacity. On the first day, he met members of the Israeli chambers of commerce, interacted with the Indian Jewish Community and Indologists and paid homage to the Indian soldiers who died in World War-I by visiting the Indian cemetery at Talpiot.

Indian soldiers played a key role in the battle of Haifa in 1918. During the 2018 visit of the then Israeli PM Benjamin Netanyahu, the name of Teen Murti chowk was formally rechristened as Teen murti Haifa chowk.

The three statues at the chowk in the heart of central Delhi belong to the Hyderabad, Jodhpur and Mysore Lancers who were part of the British India forces who helped win the battle of Haifa.