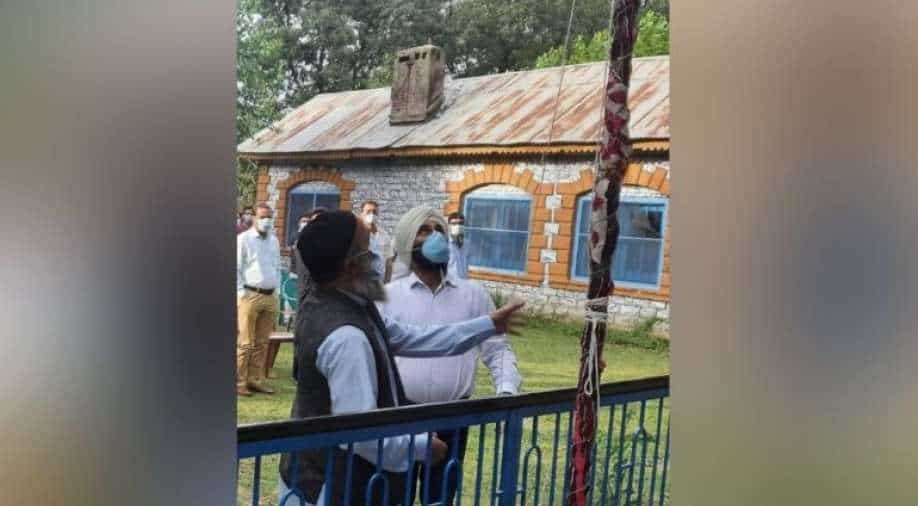 Burhan Wani was killed in an encounter in 2016, leading to massive unrest in the Kashmir valley. His father, Muzaffar Wani, hoisted the national flag at Higher Secondary school in Tral on the occasion of India's Independence Day.

On the occasion of India's 75th Independence Day celebration in Jammu and Kashmir, numerous flag hoisting ceremonies were held across the Union Territory.

Among such celebrations was one held in the Tral area of South Kashmir, where deceased Hizb Militant Burhan Wani's father, Muzaffar Wani, hoisted the national flag at Higher Secondary school in Tral.

Burhan Wani was killed in an encounter in 2016, leading to massive unrest in the Kashmir valley.

Also read | Independence Day Special: This is how military assets were divided among India and Pakistan

Muzaffar Wani is working as a headmaster in a government school at Tral In Pulwama.

The government under the "Azadi Ka Amrit Mahotsav",  had directed the education department as well as many other government-run departments to ensure that flag hoisting is held in all offices on Independence Day.

''It's the biggest change we can see as far as the ground situation in Kashmir Valley is concerned. Burhan Wani's father hoisting the national flag in itself is a bigger message not only to the national community but also to the international community that things in Kashmir have started to change. Change has already started after the abrogation of article 370. The families which were ruling for three decades had done nothing and now we see the progress of common Kashmiris," said Nasir Khan, a youth activist.

Also read | 'This is the moment, the right moment': PM Modi recites poem for youth during Independence Day address - Watch

The young political leaders in the valley appreciated Muzzafar Wani for hoisting the national flag.

''It's a wonderful thing that he has supported change and peace, he has shown his love to the nation. I would appeal to the government that Kashmiris are giving love to the nation and now Delhi has to reciprocate,'' said Aaqib Renzu, a youth counsellor.

The LG of Jammu and Kashmir Manoj Sinha said that 23,000 flags were hoisted in educational institutions across Jammu and Kashmir. The main function to celebrate Independence Day was held at Srinagar Sheri Kashmir Cricket Stadium.

Sinha also hoisted a flag on Srinagar's only Fort Hari Parbat. A 100 feet flag was hoisted there which will be visible to all the people living in the Srinagar city.