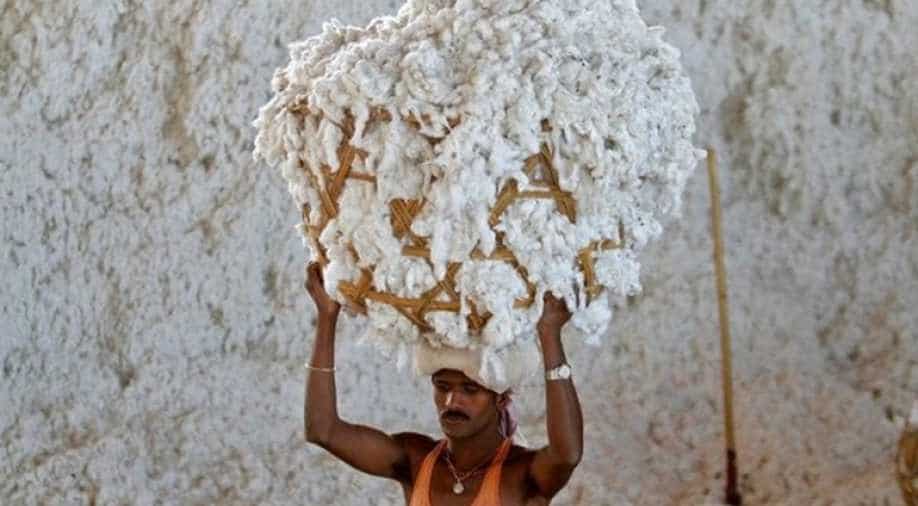 An employee works inside a cotton processing unit at Kadi town, about 56 km north of Ahmedabad Photograph:( Reuters )

Indian cotton traders have cancelled contracts to export some 400,000 bales of the fibre after a rally in domestic prices and the rising rupee made overseas sales unattractive, the president of the Cotton Association of India told Reuters.

The switch, triggering penalty payments by traders, has left cotton buyers in leading markets like Bangladesh, Vietnam and China seeking to make up shortfalls by tapping suppliers in the United States, Australia and Brazil, said association head Atul Ganatra.

The cancellations and higher local prices could cut India's exports to 5 million bales, each of 170 kg, in the 2017/18 marketing year started on October 1 - nearly a quarter below an initial estimate, Ganatra said. Prices surged more than 15 per cent in the past six weeks after pest infestations squeezed supplies in the world's biggest producer of the fibre.

"Some exports contracts for Bangladesh, Vietnam and China could not be fulfilled due to the sudden rise local prices," Ganatra said. He didn't identify the traders who cancelled export deals in moves confirmed by six dealers contacted by Reuters.

After hurricanes raised doubts about the supplies from top exporter US late last year, Indian traders signed a flurry of contracts.

The country's traders are offering cotton to Asian buyers at around 87 cents per pound, including cost insurance and freight, nearly 4 per cent more than rival supplies from the US, the dealers said.

But India has struggled to keep supplies steady after infestations of pests like pink boll worms cut output, lifting domestic prices to 87 cents per lb.

Also, the Indian rupee recently rallied to its highest level in 30 months, further slashing exporters' margins and making it difficult for most merchants to stick to their export commitments, said Vinay Kotak, a director at Kotak Commodities, a Mumbai-based brokerage.

Depleting supplies from India have also led to a shortage in the global market, lifting international prices to their highest level in 3-1/2 years - and helping the United States, Brazil and some other key suppliers increase their market share, especially in Asia.

"The mills have to go somewhere else to import cotton," said Peter Egli, director of risk management at British merchant Plexus Cotton. "They will come to the US, West Africa, and later to Australia and Brazil. Those are the main origin points."

The US has committed to sell 678,720 bales of cotton to Bangladesh so far this season, more than double the quantity sold a year earlier, according to the US Department of Agriculture.

Bangladesh had emerged as a big buyer of Indian cotton thanks to competitive prices and lower freight costs, sourcing nearly half of its annual import requirement of 7 million bales from India.

"But now we are in trouble, as many of our contracts with India got stuck over a sudden jump in prices," said Muhammad Ayub, finance director at the Bangladesh Cotton Association.