India-China face-off: Your courage is higher than the mountains, PM Modi to Indian troops at Ladakh Indian Prime Minister Narendra Modi reached Ladakh in a surprise visit to review the situation amid the ongoing face-off between Indian and Chinese forces.

The prime minister was accompanied by Chief of Defence Staff (CDS) General Bipin Rawat and Army chief MM Naravane. Sources said 14 Corps Commander briefed them about the situation on the ground. 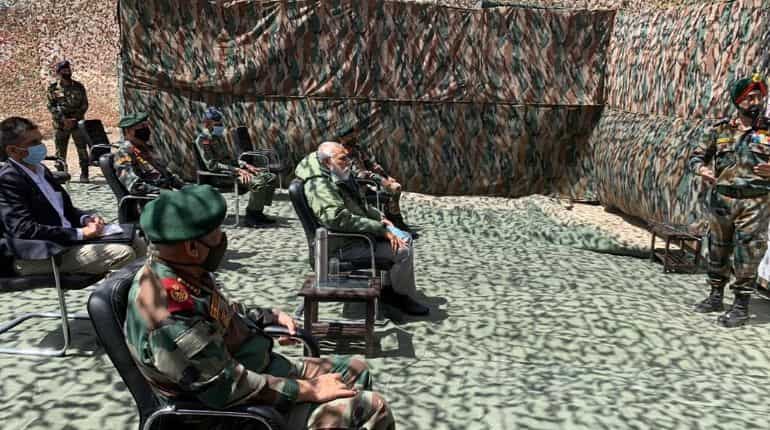 PM Modi met soldiers after addressing them in Nimmoo, Ladakh.

"Your valour, respect and sacrifice towards mother earth cannot be compared," the Indian prime minister told the troops at the border, adding: "your courage is higher than the mountains where you are posted."

"The enemies had seen the fury of the soldiers," he said. "This land in Ladakh is India's crown, it has given several Bravehearts to the nation," he said.

"Those who are weak can never initiate peace," he said. The Indian prime minister invoked poet Ramdhari Singh Dinkar, saying: " Whose battle cry, the earth is still drooling. The pen writes about his glory today. I speak your words with my voice today."

"Those who are weak can never initiate peace," he said.

Referring to Lord Krishna, the PM said: "If we worship Krisna with a flute, the chakradhari bows his head in front of Krishna."

"History is witness that expansionist forces have either lost or were forced to turn back," he said, adding." whenever I think of a decision based on national security, I think of the two mothers - the first is our Mother India and the second is our mothers who have given birth to the Bravehearts such as you."

PM Modi's visit to Ladakh is his second outside national capital Delhi since the outbreak of coronavirus. Earlier, he visited the eastern Indian city of Kolkata post destruction due to Cyclone Amphan.

Also read | Befitting reply has been given to those coveting our territories: PM Modi

Earlier Defence Minister Rajnath Singh was supposed to visit Ladakh on Friday, but his visit got deferred.

Tensions between the Asian giants escalated following a violent face-off in the Galwan Valley in Ladakh on June 15, in which 20 Indian troops were martyred.

A number of commander-level talks between India and China have taken place to de-escalate the situation along the border. However, there has not been any reduction in troop deployment by the Chinese.