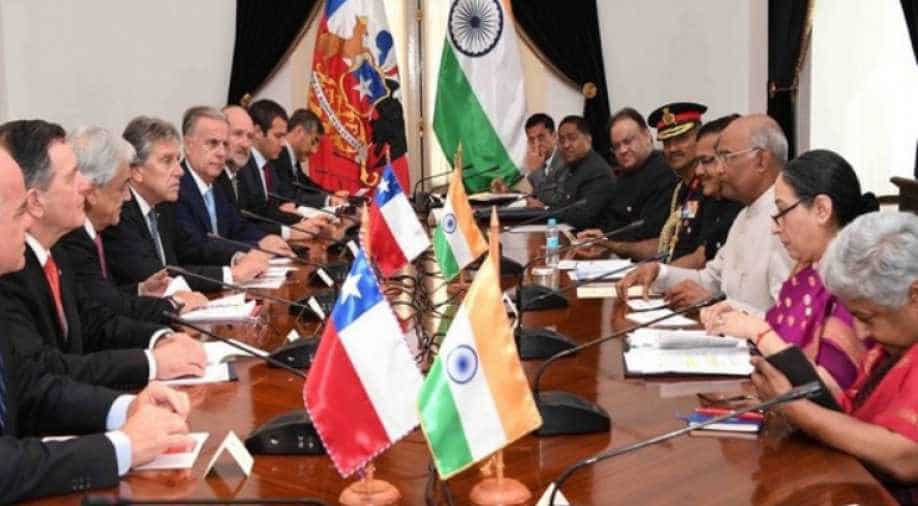 President Kovind who arrived in Chile on a three-day visit is on the last leg of his three-nation tour that included Bolivia and Croatia.

President Ram Nath Kovind on Monday (local time) met and discussed wide-ranging issues of mutual interest with his Chilean counterpart Sebastian Pinera and the two sides signed three Memoranda of Understanding (MoUs) in the fields of mining, culture and disability.

President Kovind who arrived in Chile on a three-day visit is on the last leg of his three-nation tour that included Bolivia and Croatia.

During bilateral talks between the leaders, Chile announced that it will allow visa-free entry to Indian nationals holding a valid visa of the United States of America.

Welcoming Chile’s decision President Kovind said it would promote both cultural and business ties between the two countries.

Thanking Pinera for his strong condemnation of the Pulwama terror attack in Jammu and Kashmir, President Kovind noted that the two countries have also agreed to work together to strengthen the global response to defeat and destroy terrorism in all its forms and manifestations.

In addition, both India and Chile agreed to explore opportunities for other cooperation in the defence, space research and explorations.

On the same day, President Kovind addressed students and faculty of the University of Chile on the topic 'Gandhi for the Young'. The University also presented a Rectoral Medal to the President.

Researchers from the University of Chile briefed the President on "Strategy for the development of a space programme for Chile". The President interacted with scientists, including those who were involved in building Chile's nanosatellite, which India Space Research Organisation (ISRO) launched in 2017.

President Kovind also addressed the India-Chile Business roundtable in Santiago and said that Chile is India’s window to Latin America and to the Pacific Alliance. The

President emplaned for India later in the day.

"As we depart from Chile, the First Lady and I would like to thank President @sebastianpinera and the friendly people of Chile for their warmth and affection. May our ties grow as tall as the Andes and Himalayas," the President posted on his official twitter handle.

Prior to Chile, the President visited Croatia and Bolivia from March 25 to March 30.