I can contest from anywhere but don't want division of votes: Mamata Banerjee 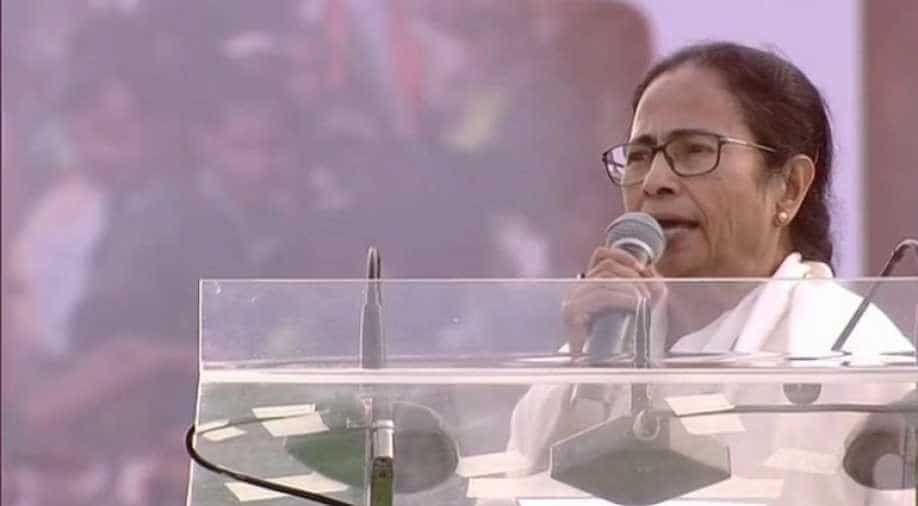 'We will not leave any stone unturned to come into power in the state. Everyone vote is very important to bring development in Bengal,' Banerjee said.

West Bengal Chief Minister Mamata Banerjee on Saturday said she can contest from any part of the country but chose not to do so as does not want division of votes, adding that stronghold of regional parties in states is a must.

"I could have fought from several places. People asked me why I'm not contesting as our TMC has got national party recognition. I can contest from Uttar Pradesh, Rajasthan and Bihar. If I'm winning I can contest from anywhere but I do not want division of votes," she said while addressing a public gathering at Siliguri in West Bengal.

"I want regional parties to go ahead. Lalu Yadav in Bihar, Mayawati and Akhilesh in Uttar Pradesh and AAP in Delhi. I have helped everyone and brought everyone together," she stressed.

Underlying the need for the Opposition to defeat the BJP government, Mamata said, "We contest on 9 seats in Assam, 1 in Andaman, 2 to 4 in Odisha. We will contest from Jharkhand on three to four sets but Bengal is our main focus and loyalty. We will not leave any stone unturned to come into power in the state. Everyone vote is very important to bring development in Bengal."

The Trinamool Congress (TMC) supremo said wherever regional parties are strong they should not lose their votes from their area. "BJP is at no place, CPM is something in Kerala but nothing across the country. Even Congress can do nothing. Whatever little they have in other states let them fight from there...we have no issue with it. But where I am strong why would you vote for the Congress. Where Chandrababu Naidu is strong why would you vote for some other party," she said.

Continuing her tirade against the BJP and Prime Minister Modi for ruling in an authoritative manner, Mamata said, "BJP looted traders, framers, industrialist, young generation and maa-behen (mother-daughter). Scheduled Castes and Scheduled Tribes are facing atrocities. We will not allow this. We will follow the footsteps of Dr BR Ambedkar. No political party has the right to torture the minority."

"Air India no more serves non-vegetarian food. It is like what he (PM Modi) wants to eat everyone has to eat that. We will eat what we want. It is my choice whether I want to eat veg or non-veg. Who is Modi to tell us?" she said.

She added it is dangerous for us that there is a party called RSS who carries "danda (stick) and roam around with goondas" (goons). Asserting that Prime Minister Modi is spreading rumours about two most prominent religious festivals -- Saraswati pooja and Durga Pooja, the TMC chief said, "Is it so? Are not we celebration Durga pooja and Saraswati pooja. Who is he to tell us about our people, state and culture. Can he chant a single mantra? For his whimsical thoughts, he has started behaving like Hitler."

The Lok Sabha polls for 42 parliamentary seats in West Bengal began on April 11 and it is staggered in all seven phases till May 19. The results will be declared on May 23.