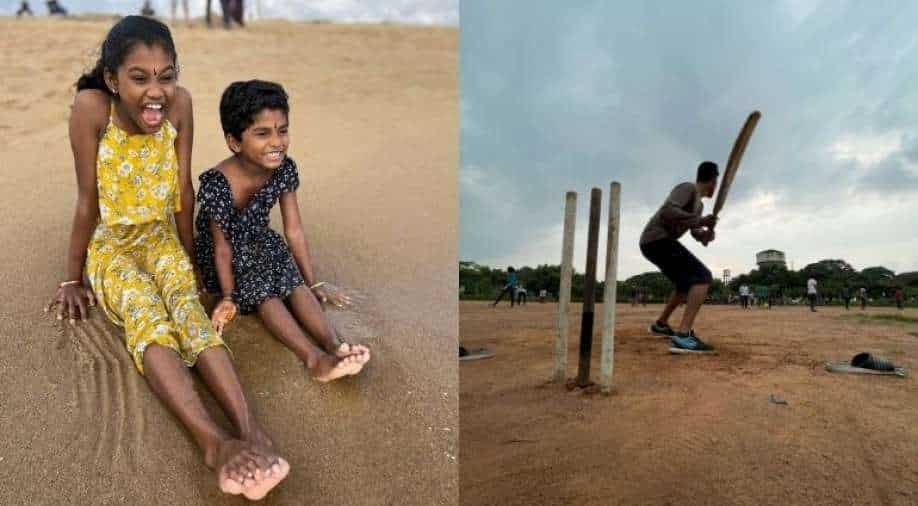 Mentored by the photography educators from Chennai Photo Biennale Foundation, over a period of three months, the students were trained based on the course material prepared by the team

For about 40 students who hailed from very diverse backgrounds, belonged to different parts of Tamil Nadu, in Southern India, it was their first-ever photography workshop.

Conducted amid the pandemic, the training in mobile photography was imparted both in online and offline mode, depending on where the students were from. 'Composition, framing, lighting, exposure' were some of the finer aspects of photography that the school students, aged between 13 and 19 had learnt. At the end of their training, their work was even framed and exhibited at the iconic Egmore museum in Chennai.

Forty high school students from Tamil Nadu, India captured the vibrance of their communities on iPhone 13 mini. Now their work is featured in the student showcase at the historic Egmore Museum for the Chennai Photo Biennale. #ShotOniPhone https://t.co/t0DhNYWGvm pic.twitter.com/I30DTwZkbT

Mentored by the photography educators from Chennai Photo Biennale Foundation, over a period of three months, the students were trained based on the course material prepared by the team. "Mentoring students is an important part of our work and we went online after the pandemic hit. Around 2021-end, we also had a few in-person workshops for the students in Chennai. Our idea was to have children capture the diversity of Tamil Nadu, under the theme 'Land of Stories'- the heritage, people, places" Gayatri Nair, Director of Education, Chennai Photo Biennale Foundation told WION.

Also read | A new iPhone SE with 5G, new iPad Air & a chipset touted as the fastest yet, here's everything Apple announced

The frames on display showed pets, birds, architectural landmarks, portraits, patterns and what not! But the feelings of the first-time exhibitors were even more vivid.

"This is the first time I've attended a Photography session and I'm so excited that our work is being displayed at the museum" said S. Asreen Banu, a student from Chennai. For Aishwarya, a speech-impaired student from Chennai, photography is more than a mere hobby, it’s a means of expressing herself.

"I'm very happy that my parents and other visitors will be able to see the pictures that we have clicked" she said.

"We are a non-profit foundation that has been teaching photography since 2018. We work a lot with iPhones and we lent these phones to the students for this project (to ensure everyone had access to the same gear). They were asked to click everything that was a quintessential representation of Tamil Nadu, so that we could exhibit the best work in as large as 4feet by 8 feet prints" Varun Gupta, CO-Founder, Chennai Photo Biennale Foundation told WION.

Snaps by school students from across #TamilNadu mentored by @chnpb & @goetheinstitut in #mobile #photography , over 2-3months during pandemic. All participants hailed from diff social strata, some were spl kids.

It was a few weeks into the exhibition that Apple CEO Tim Cook had tweeted about the photographic work of school children being on display in Chennai. Open till April 17, the CPB exhibition venue will also witness various photography-related events, every weekend.