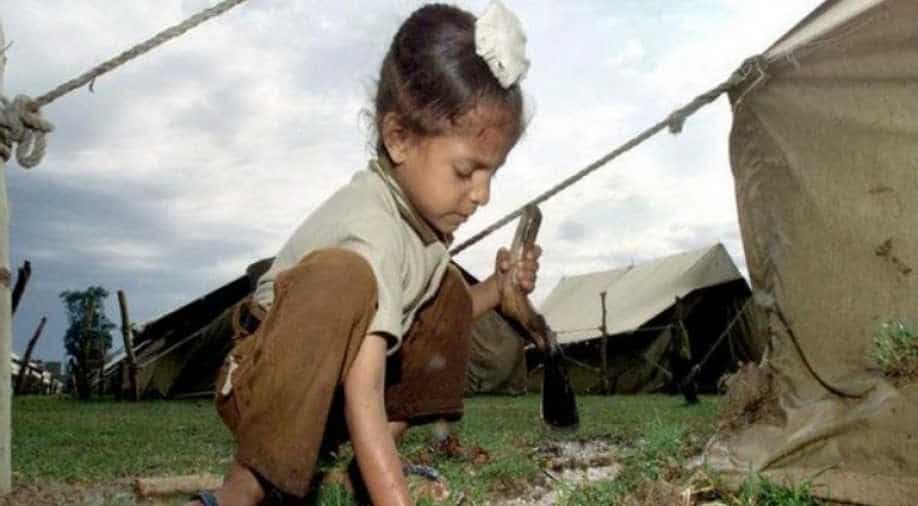 These people trickled into India over the last two decades, escaping religious persecution back in Pakistan and found a new home in India.

Thousands of Hindu and Sikh refugees from Pakistan, who were eagerly awaiting the passage of a bill by Parliament that would grant them Indian citizenship, are disappointed that it could not fructify in the just-concluded Winter session but have not given up hope.

These people trickled into India over the last two decades, escaping religious persecution back in Pakistan and found a new home in India.

Most of them, hailing from Sindh and Khyber Pakhtunkhwa regions of Pakistan, are staying in places like Amritsar and Ludhiana in Punjab.

Living here on the basis of a temporary visa, which is extended from time to time, these migrants are in a condition of statelessness, because of which they are unable to educate their children.

In 2017, 431 Pakistani Hindus were given Long Term Visa in line with the Modi government's policy to help rehabilitate minorities who fled from Pakistan, Bangladesh, and Afghanistan.

Without any provision for getting long-term visas, Hindu and Sikh migrant families from Pakistan are trying relentlessly to get their visas renewed. Another problem for these families is to find suitable guarantors for their visas. The movement of Pakistani passport holders are also restricted.

While talking to ANI, some of the migrants narrated their problems, recounting the stories of harassment and torture experienced back home in Pakistan.

They were keenly tracking the fate of the Citizenship Amendment Bill in Parliament during the just-concluded Winter Session in the hope that it would be passed into law.

The bill, which is aimed at amending the Act of 1955, was passed by the Lok Sabha but got stuck in the Rajya Sabha where the Opposition parties insisted on sending the legislation to a Select Committee for thorough scrutiny.

"We have been staying in Amritsar for last 22 years. My grandfather, father and aunt died here seeking the nationality. I request the government and the Opposition to grant us citizenship. I want to fulfill my mother`s last wish of dying as an Indian citizen," said Parminder, who refused to reveal his full identity fearing a backlash to his relatives in Pakistan.

"My sister is being threatened with divorce because her husband's family no longer wants to bear the problem of visa renewal. Most of us struggle to get our daughter and sister married because of our Pakistani nationality. I pray to the government to pass the bill as soon as possible. I do not want her marriage to break just of this," said Shyam, another refugee.

"We are thankful to the government which thought about us and initiated the Citizenship bill," said Balwinder (again name changed).

He said the family hails from Khyber Pakhtunkhwa region of Pakistan. "We tried to stay there as long as possible but then the situation became worse. We were threatened by the Taliban to either change our religion or face prosecution. We thought it would be better to die one day rather than dying very moment," Balwinder added.

His wife Harpreet said, "In Pakistan, we had to obey several compulsions. We had no freedom to live our life. Men were allowed to go outside for work and women were mostly confined to homes. In India, we have got freedom. The only problem is the citizenship. Hope the government grants us citizenship so that we can at least get rid of visa requirement."

"I was only three-years-old when my parents along with other family members fled from Pakistan. I went there in 2008 but I find striking similarity between what my parents told and what I saw after visiting Pakistan after so many years. Nothing has changed. Even today, many Hindus and minorities staying in Pakistan face rampant discrimination and threats on religious grounds. All they want is to return to India for a safer life," said Visah Tiwari.

He went to Pakistan in 2008 for renewing his passport as mandated by the Pakistan government.

Rajinder, originally hailing from Peshawar, came to India in 2012 but he sent his family ahead of him in 2005 after the Taliban came to their area and demanded extortion of Rs 6 crore.

"We were asked to pay the amount then and there or face execution. I somehow managed to send my wife and children to India," he said. His extended family is still in Peshawar.

Ram Charan (name changed), another Hindu migrant from Peshawar, said, "I escaped to India in 1994 at the age of 14. In Peshawar, I saw how people were being bombed. When my father used to go out to earn, I would quietly pray inside our home that I should not hear about his demise. I also have a sister, I used to live in fear because young women were being kidnapped on broad daylight and nobody dares to resist."

As per the existing Citizenship Act, 1955 a migrant is declared 'illegal migrant' if they entered India or overstayed without any travel document. The present amended bill says that citizenship will be provided to people who were forced to flee from their country after being subjected to religious persecution or fear of persecution in their homeland, primarily Hindus, Sikhs, Jains, Buddhists, Parsis and Christians from Afghanistan, Pakistan and Bangladesh.