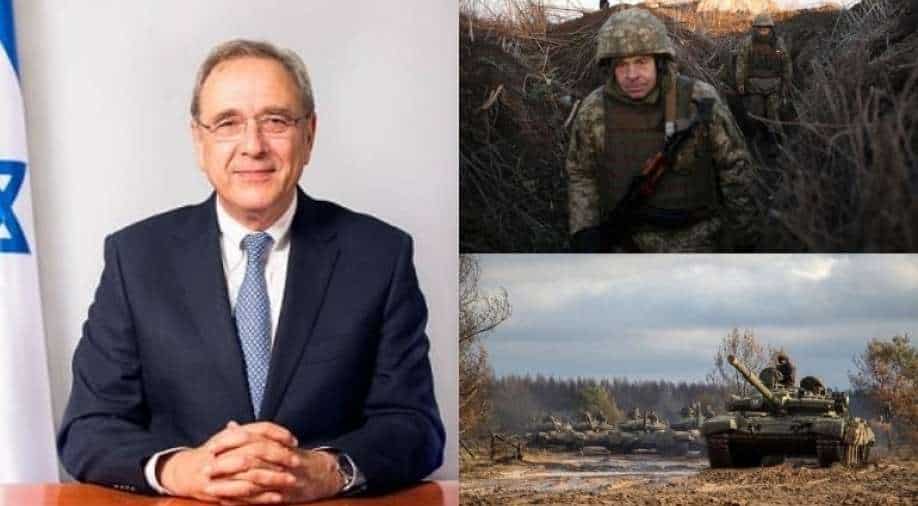 In these combination of images, former ambassador of Israel to India Mark Sofer (L) can be seen along with members of the Ukrainian army (R). Photograph:( Agencies )

Backing the West's ideology and approach, Sofer has said that Israel has vital national interests with both Ukraine and Russia

In an exclusive conversation with WION's correspondent Jodie Cohen, former ambassador of Israel to India, Mark Sofer has said that he is hopeful that diplomacy will solve the Ukraine crisis.

Russia has massed an estimated 150,000 troops on three sides of Ukraine, the biggest such buildup since the Cold War.

Moscow denies it has any plans to attack, but wants Western guarantees that NATO won’t allow Ukraine and other former Soviet countries to join as members.

It has also demanded the alliance halt weapons deployments to Ukraine and roll back its forces from Eastern Europe, demands flatly rejected by the West.

Backing the West's ideology and approach, Sofer has said that Israel has vital national interests with both Ukraine and Russia.

"When two elephants fight, the grass always suffers. And here, we are the grass", says Mark Sofer, former ambassador of Israel to India, to @JodieCohen613, on the ongoing diplomacy efforts to avoid the Russian invasion in Ukraine.

He said that ''Israel must adopt a middle path in this conflict,'' adding that although the country is ''not a player in this dispute but we have a lot to lose.''

"When two elephants fight, the grass always suffers. And here, we are clearly the grass," Sofer said.

He believes that the world should ''hope for the best and prepare for the worst.''

''Israel is always at the forefront to save Jews around the world. Absorbing them from abroad is not difficult for the country,'' he said.

''In recent history, Jews have been evacuated from several countries such as Iran and Ethiopia,'' he added.