Sonam Kapoor takes lehenga to Cannes, turns up as a desi bride on the red carpet 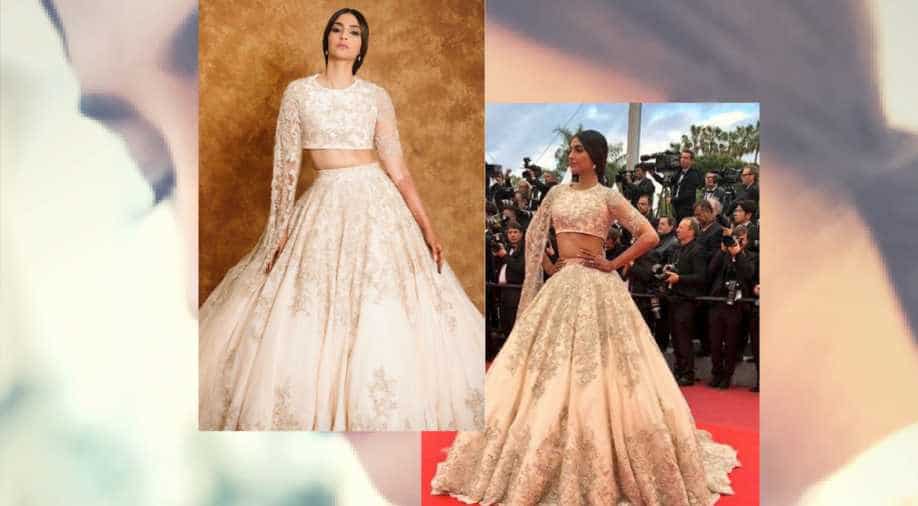 Trust Sonam Kapoor to never bore you on the red carpet. The Bollywood actress who recently got married in her hometown, Mumbai took the Cannes red carpet by a storm when she chose to wear a lehenga dress on her first outing this year.

Dressed as a bride, Sonam Kapoor changed the mood at the red carpet as she wore Ralph and Russo designed customised lehenga or ball-gown-like-skirt paired with a crop top and one side sleeve cape with heavy silver work.

She kept the look neat with hair tied at the back and middle parting. She even used a naga jadai (typically a braid accessory) to add detailing to the back. Sonam paired the look with light makeup, crystal earrings and a lot of oomph that comes naturally to her.

The diva sported her henna hands as the sleeves cut short at the elbows.

See and swoon over her look:

Sonam was earlier in the day spotted in a classic black and white Maxi dress by Mother Of Pearl that she paired with a pair of Chloe boots. Sharing her first look from Cannes, she wrote: "Hey, Cannes!"

Later in the day, for the auction dinner for NGO Positive Planet with Jacques Attali, Sonam wore a beautiful dress with mint coloured tulle used as sleeves that formed a bow at the back of the dress. She opened her hair for the look and wore dazzling green earrings.

This is what she wore: