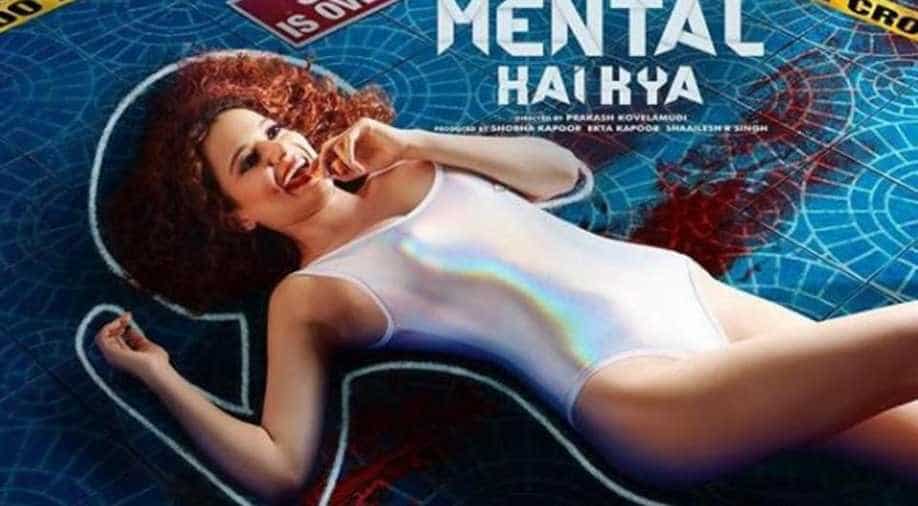 Kangana Ranaut in new poster for 'Mental Hai Kya'-- posing in what looks like a crime scene. Photograph:( Twitter )

As we informed yesterday about the release of first posters of the film, the makers have now released two more -- with Kangana and Rajkummar posing whackier than before.

Released today, in one poster Kangana can be seen posing in what looks like a crime scene wearing a silver coloured bikini. She lies on the chalk outline which is used to mark a dead body. Meanwhile, Rajkummar has tape all over his face as he winks with an eye at the camera (or maybe, us?)

Have a look at the recently released posters:

This is the first posters released yesterday:

It's time to bring out the crazy in you..
Because Sanity is overrated! Here's the first look of #MentalHaiKya starring #KanganaRanaut and @RajkummarRao. @balajimotionpic pic.twitter.com/9K48IMVhEE

After releasing the first poster, the film's team along with Ekta Kapoor were spotted partying in Mumbai.

Mental Hai Kya has been written by Kanika Dhillon. Its director, Kovelamudi, a popular Telugu actor-filmmaker, bagged a National Award in 2006 for Bomelatta. The film goes on floors this month with the first schedule beginning in Mumbai before the cast and crew move to London.

Sharing her excitement about the project, Ekta Kapoor said in a statement, “’Mental Hai Kya’ celebrates the beauty in imperfections and in being different and shouts out, Sanity is overrated! I’m thrilled to work with Kangana and Raj on this one.”