'Lust Stories': The film is a lot more than the four-letter word and thank god for that 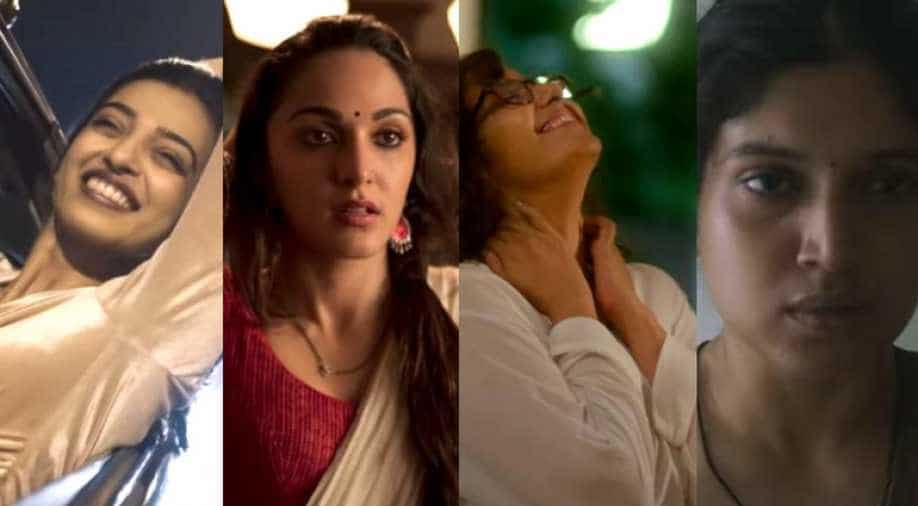 'Lust Stories'- Netflix India's new anthology film sure does grab eyeballs for its title. But when you look deeper into the myriad characters, the four stories are actually about four flawed women and their tryst with lust.
Directed by four filmmakers- Anurag Kashyap, Zoya Akhtar, Dibakar Banerji and Karan Johar- the four short stories have lust in the backdrop of each of the stories but in reality give out a strong message on society, class divide and one's own psyche.

In Anurag Kashyap's story, Radhika Apte plays a conflicted personality called Kalindi. She is a college teacher who is in an open marriage. On one drunken night, Kalindi sleeps with her student, played by Akash Thosar of 'Sairat' fame. And while the next morning she is convinced that it was just that - and even compels her student to record a statement that it was consensual, she becomes an obsessive monster who just can't leave the poor guy alone. In between the stalking him and his date, she can be seen speaking about her inner feelings to an imaginary shrink or maybe to herself. The camera never really reveals the listener, but the monologues do reveal how complex and confused Apte's character is about love, lust and life. Unlike Kalindi, Sudha (Bhumi Pednekar) in Zoya Akhtar's film isn't confused about her status in her employers'life. A bachelor, (Neil Bhooplam) he often has sex with his house help Sudha. While she may have control over him on the bed, she knows what her place in his household. Akhtar explains the humdrum of city life without too many dialogues, but thereby brilliantly explaining the stark class divide between the lead couple of her story. In Dibakara Banerji's story, the woman Reena (the ever so charming Manisha Koirala) is a woman of few words but someone who knows how to control the two men in her life. On a weekend getaway with her lover (Jaideep Ahlwat), Reena's blissful vacation is disrupted by her self-centered, control freak husband (Sanjay Kapoor) who also happens to her lover's best friend. And while the men skirt around the issue at hand, it is Reena, the bored housewife having an affair outside her marriage, who takes charge and gets her sweet, subtle revenge.

Perhaps the most in-your-face story on lust is delivered by Karan Johar and predictably so. Johar's story is of new bride Megha(Kiara Advani in a refreshing act) who never finds any sexual satisfaction from her over-enthusiastic, naive husband Paras (played by the brilliant Vicky Kaushal). Paras is a man of five thrusts literally who never understands the concept of giving any kind of pleasure to his wife while making love. So Megha decides to take things in her own hand which ultimately has some hilarious consequences. Now, Johar always has had the ability to laugh at himself and here too uses an age-old popular 'Kabhi Khushi Kabhi Gham' theme song in the most convoluted situation- you will never see that song in the same way after watch 'Lust Stories'. The actors in all of the four films are pitch perfect. Radhika Apte, as the confused, conflicted Kalindi is a scene stealer like always. Much like her student, you will be left exasperated and slightly amused by her antics. Manisha Koirala brings back nostalgia as she plays the ice -cold, calm Reena to perfection. Just hope we get to see more of her on the big screen from now on. Zoya Kahtar's leading lady, Bhumi Pednekar emotes through her eyes. She barely has two lines in the film, but with just through her expressions, she plays Sudha - the housemaid with momentary dreams in her eyes and ultimate realisation of her place in the social strata brilliantly.

Also read: Anurag Kashyap on 'Lust Stories' and the future of cinema halls in the digital age

While the film boasts of formidable actors, who have in the past proved that they are dependable names, it is three-films old Kiara Advani in Karan Johar's story who is a revelation. Kiara plays the unapologetic new bride Medha and looks her part, playing the woman who never really finds any kind of satisfaction from her over-enthusiastic husband. There is a certain glint of sarcasm in her eyes as she quietly observes her husband's buffoonery.

Among the men, Jaideep Ahlawat and Vicky Kaushal stand out distinctly as the inept, unaware, weak men to their strong women in life. Vicky Kaushal is endearing as the fumbling, inadequate husband who never really gets his wife. It's amazing to see the actor portray such a different character from what he has played earlier. 2018 is clearly turning out to be Kaushal's year- and rightfully so. Ultimately, 'Lust Stories' makes for a compelling watch. Between the cocky lines, between the thrusts, secret romances and mindless banters, it gives a out a message loud and clear- that a woman often has to take control of things to find her own happiness.

'Lust stories' will be available for streaming on Netflix from June 15th.