Kangana Ranaut on meeting PM Modi: I am a big fan of NaMo, he is the right role model 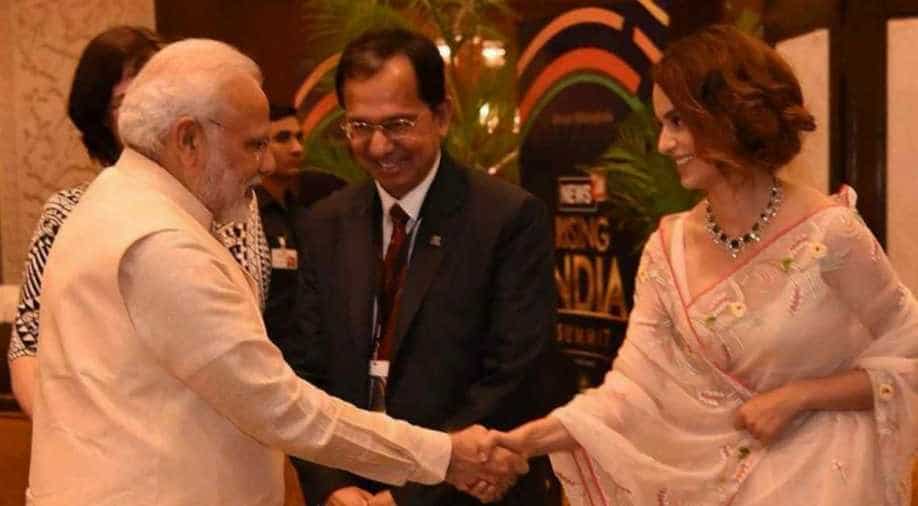 The Queen actress Kangana Ranaut who is often labelled as the queen of controversies in Bollywood met Indian Prime Minister Narendra Modi recently during an event in Delhi.

At the event, Kangana could be seen gushing while meeting NaMo as she revealed that she is a big fan of him and considers the PM to be her role model.

She was quoted: “I am a big Modi fan because of his success story. As a young woman, I do believe that we need to have the right role models. I mean the graph and the ambition of an ordinary man and whenever we have a PM who is a chaiwala, then I always say that it is not his victory but it is the victory of our democracy. I feel he is the right role model.”

There is so much power, wit & flair in these pics! When #KanganaRanaut met Hon'ble @PMOIndia Shri @narendramodi & CBFC Chairman & prolific Songwriter @prasoonjoshi_ at the #News18RisingIndia Summit by @CNNnews18 pic.twitter.com/M5n3tXMT3b

At the event, Kangana also called herself a nationalist and also made a statement stating that she will leave her boyfriend if he is not patriotic. According to the actor, the meaning of being a nationalist is misinterpreted by people. She also stated that she would like to join politics some day and lend her services to the nation.

Meanwhile, on the work front, Kangana is currently shooting for Manikarnika - The Queen of Jhansi and is working for Ekta Kapoor's film with Rajkummar Rao titled Mental Hai Kya.