Doctors save life of boy who ingested AA battery without surgery 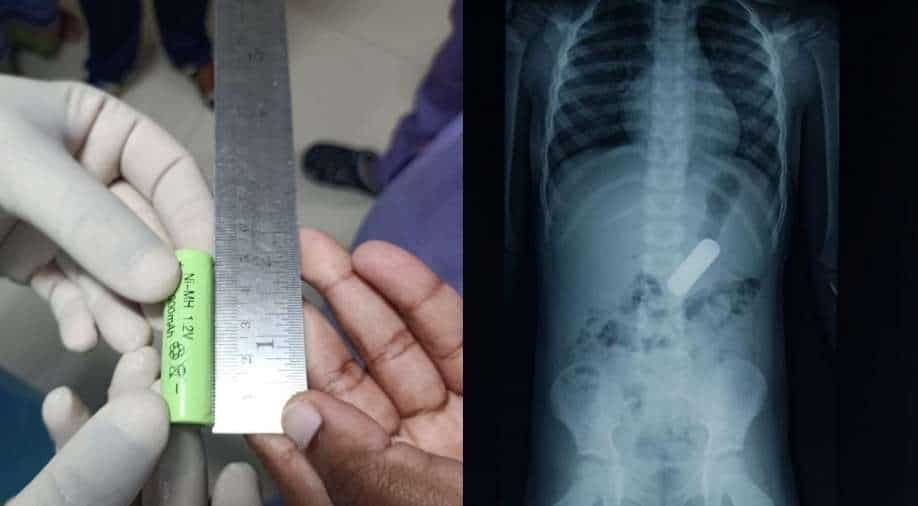 Doctors save life of boy who ingested AA battery without surgery Photograph:( WION )

By accident, the child had swallowed the battery that was being used in the remote control, while playing with it at his residence. An X-ray revealed that the battery was lodged in the child's stomach

Having informed his parents of having ingested a 5-cm-long battery and the parents' decision of seeking immediate medical help has saved the life of a 4-year-old.

By accident, the child had swallowed the battery that was being used in the remote control, while playing with it at his residence. An X-ray revealed that the battery was lodged in the child's stomach.

However, doctors managed to remove the battery via an endoscopy, thus avoiding further delay and the complications associated with going in for a surgical procedure.

WION Media spoke to Dr R. Ravi who performed the procedure in a considerable amount of time and saved the boy, nearly fourteen hours after he ingested the battery.

However, in this case, the swallowed object measured 5cms in length and 1.5cms in width, which was as large as the child's food pipe.

This also made the removal via endoscopy complicated. There was a risk of damaging the internal organs while performing the procedure, neither would the battery exit the system via excretion.

"There is also the risk of the battery corroding in the acid that the stomach produces and thereby releasing the chemicals that it holds within. Such heavy metals could lead to toxicity in the patient's system," Dr Ravi said.

#Chennai - without surgery, doctors save 4yr old who ingested 5cm-long AA battery, which ws nearly the size of his food pipe

Batt was lodged in stomach, had risk of corroding in contact with acid

Based on their examination of the boy, the doctors decided to go ahead with an endoscopy procedure, while using a Roth net, a device that helps capture, scoop out the foreign object.

According to the doctor, even certain types of tumours can be removed using this net. He also added that the battery had to be aligned carefully to not cause damage to the boy's food pipe.

In his advice for parents, he urges them to keep such objects away from young children, as much as possible and provide the children with big sized toys that don’t pose the danger of being ingested.

He particularly warns against keeping needles, glass pieces, magnets, medicines and such items away from the reach of little kids.

He emphasised how it is important for parents to encourage their kids to report the mishap, to enable appropriate medical attention.