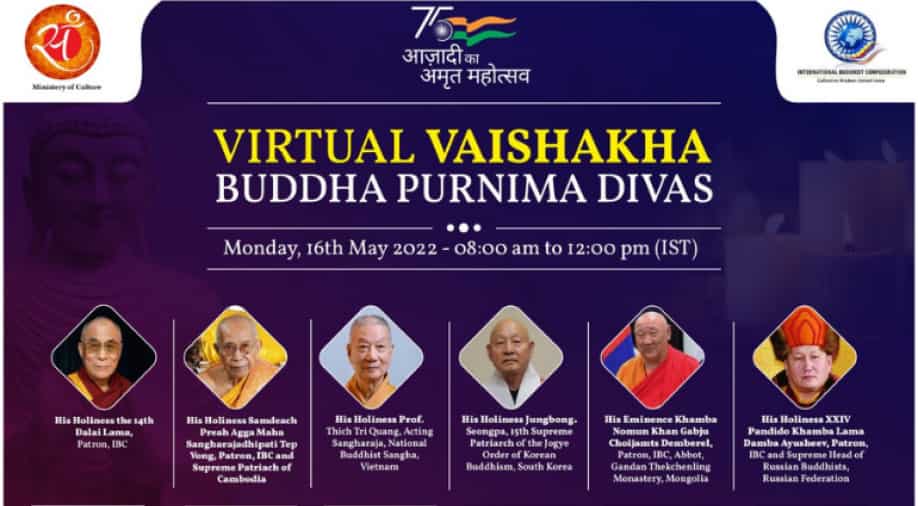 In this poster of the event, which is being co-hosted by the Indian govt, Buddhist spiritual leaders from several countries can be seen Photograph:( Twitter )

The day-long event is also being co-hosted by the International Buddhist Confederation (IBC). India headquartered IBC was founded in 2013 and aims to provide a platform for the global Buddhist community. The development comes on a day when Indian Prime Minister Narendra Modi will be at Nepal's Lumbini on a one-day trip.

Lumbini is the birthplace of Lord Buddha. During the stay, which comes on Buddha Purnima, PM will address a gathering and hold talks with Nepal PM Deuba. During the event Dalai Lama, who is also a patron of IBC in a spiritual message said," we are celebrating Vesak, which commemorated the Buddha's attainment of enlightenment after enduring six years of austerity".

Interestingly, Prime Minister will participate in the "Shilanyas” ceremony for the construction of a centre for Buddhist culture and heritage, in a plot belonging to the International Buddhist Confederation (IBC), New Delhi within the Lumbini Monastic Zone. The construction of the Centre is being undertaken by the International Buddhist Confederation (IBC) under the auspices of the Lumbini Development Trust with the support of India's Culture Ministry.