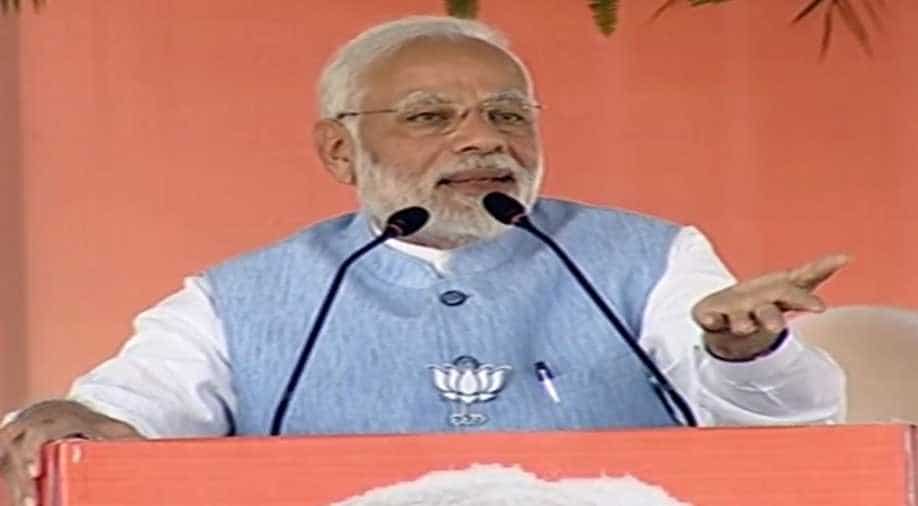 Rajya Sabha Chairman M Venkaiah Naidu rejected the notice, saying the case against the then CJI was based on "suspicion and conjectures".

Without naming anyone, Modi claimed that Congress party's Rajya Sabha members, who are also lawyers, had tried to scare away the apex court judges to ensure the hearing in the cases is delayed until after the 2019 Lok Sabha election.

In an unprecedented move, seven opposition parties led by the Congress had moved a notice for the impeachment of then Chief Justice of India Dipak Misra in April this year, accusing him of "misbehaviour" and "misuse" of authority.

Rajya Sabha Chairman M Venkaiah Naidu rejected the notice, saying the case against the then CJI was based on "suspicion and conjectures".

At the political rally in Rajasthan's Alwar district, Modi said the Congress has no faith in democracy and judiciary. "It does not hold dialogue and stall proceedings in Parliament, but the new game they are playing now is dangerous and this must be debated for a bright future of the country."

"If a Supreme Court judge does not prepare the timetable (for hearing cases) as per their (Congress's) political intentions and wants to hear all to deliver justice on a serious and sensitive issue, such as Ayodhya, then the party's lawyers, who are Rajya Sabha members, start the game of scaring the judges in the name of impeachment," Modi said.

He urged intellectuals to analyse this "dangerous game" of the Congress in the interest of the country.

"They are working to scare judiciary on the ground of their numbers in Rajya Sabha. But we will not let this 'kaala kaarnama' happen in the temple of democracy," he said.

The prime minister said the opposition party has "no courage" to talk about development and hence "they ask about the caste of Modi."

"Will you vote on the basis of the caste of Modi? Will the future of Rajasthan be decided on basis of birthplace of Modi," he asked the crowd gathered at his rally.

Modi's remarks were a reaction to former Union minister CP Joshi's statement when he had questioned the caste of Modi and others during a speech in Rajsamand district's Nathdwara.

Joshi is the Congress candidate from Nathdwara assembly constituency.

"They are deep neck involved in casteism. Casteism and feeling of hate against poor, deprived, underprivileged is in their veins and such statements reflect the basic behaviour and conduct of the Congress. It does not matter who spoke that (Joshi's renmarks) because everyone knows about the 'naamdaar' who make them speak," he said, apparently referring to the Gandhi family.

Modi also targeted the Congress over issues and discrimination faced by Dalits, saying the party "forgot" to give the Bharat Ratna to B R Ambedkar.

Ambedkar was awarded the Bharat Ratna in 1990, 34 years after his death.

"Congress has only divided the country. For them, Dalits are a vote bank while our values and traditions are different," Modi claimed, trying to contrast his party's attitude to the community, of whose members have been assaulted and beaten by right-wing activists for allegedly indulging in cow trade, with that of the Congress.

In Rajasthan, Modi praised the BJP's Vasundhara Raje government, saying it has done lot of work.

He also attacked Congress over a recent video in which a Congress candidate is seen stopping a party supporter shouting "Bharat Mata ki jai" and then the supporter starts shouting: "Sonia Gandhi ki jai".

Modi recalled BJP leaders like former vice president the late Bhairo Singh Shkhawat and said he had started election campaign during the 2013 assembly elections in Rajasthan from Alwar.

Chief minister Raje and the party's candidates on all 11 constituencies of Alwar district were present at the rally.

In Lok Sabha bypolls earlier this year, the BJP had faced defeat in Alwar.

In the 2013 assembly election, the BJP won nine out of the 11 seats in Alwar but one of its sitting MLAs, Dharmpal Chaudhary, died in April this year; the party has given ticket to his son Manjit Chaudhary from Mundawar seat.

Located in eastern part of the desert state, Alwar shares border with Haryana and forms a part of Mewat region having a sizable population of Mev (Muslim) community people.

Alwar's Ramgarh, a constituency represented by Gyan Dev Ahuja, who has been dropped by the BJP this time, was in bad light following the mob lynching of Akbar Khan on suspicion of cow smuggling in July this year.