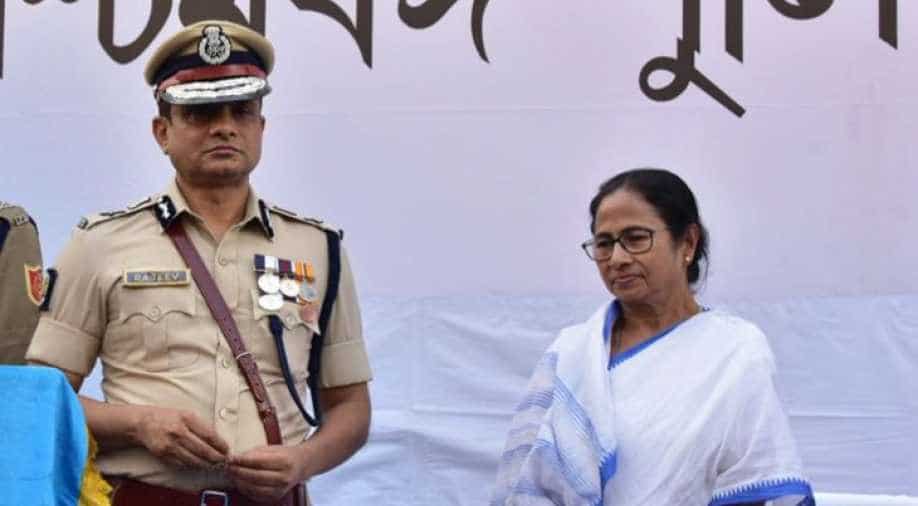 In his affidavit, Kumar claimed that he answered all questions to the "satisfaction" of the CBI which grilled him for 40 hours in five days at a neutral place in Shillong in Meghalaya.

Kolkata Police Commissioner Rajeev Kumar told the Supreme Court Monday he was grilled for 40 hours in five days in connection with the Saradha chit fund scam, and said it was "very intriguing" as to why the agency took a "major decision" to interrogate him on February 3 -- last day of the then interim CBI Director M Nageswara Rao.

The apex court on February 5 had directed Kumar to "faithfully cooperate with the investigating agency at all times" in connection with the chit fund scam and had ordered that the agency will not take any coercive steps including his arrest.

The order had come two days after the February 3 incident in which the CBI alleged that its sleuths who had gone to quiz him were bundled into a police van and detained in the police custody. The agency had also alleged that state police had surrounded the residence of its joint director Vikas Shrivastava and police personnel in uniform had joined Chief Minister Mamata Banerjee, who had sat on 'dharna' to protest CBI action.

In his affidavit, Kumar claimed that he answered all questions to the "satisfaction" of the CBI which grilled him for 40 hours in five days at a neutral place in Shillong in Meghalaya. He said he reached Shillong on the evening of February 8 and joined investigation on February 9 at 11 am.

Kumar said he was "subjected to approximately 40 hours of questioning spread over 5 days, from February 9 to February 13" during which he was in Shillong, and "continued to join the investigation, responding to each query truthfully and to his best knowledge, despite the questions being repetitive in nature".

He said that on February 12, he was willing to continue with the examination even after 10 pm, but was given the notice to appear on the next date.

He stated that there were only 15-20 questions left which the CBI needed answers to, and it was only at 12.30 pm on February 13 that he "was discharged, after answering all the questions that the CBI had, to their satisfaction".

The Kolkata Police Commissioner said however that it was "very intriguing" as to why a major decision by the CBI was taken to interrogate him on February 3, which was the last day of Rao in office.

Kumar, in his affidavit, said: "In this context, it is also pertinent to mention here that Sunday i.e. February 3, 2019, was the last day in office of the interim CBI Director, who was to be replaced by the present Director, CBI, the very next day i.e. on February 4, 2019.

"It seems very intriguing as to why such a major decision could not wait even for a single day for the new Director CBI to join, especially when the last notice was issued to the answering respondent, after a gap of more than a year, as noted hereinabove.

"The action taken by the CBI was also dehors the orders passed by the Calcutta High Court keeping in abeyance the notices issued by the CBI under section 160, CrPC to the State Police Officials, in presence of the counsels representing the CBI."

Kumar, against whom a strong remarks were passed by the apex court on February 4, that "if the police commissioner is even remotely trying to destroy evidence, we will come down so heavily on him that he will regret," said "he was never in exclusive and direct possession of evidences/material/documents as alleged in the instant petition, for him to act contumaciously or subvert any orders passed by this Court.

He was accused by the CBI of shielding the owners of the chit fund companies -- Saradha chit fund and Rose Valley chit fund and the people close to the ruling Trinamool Congress in the state.

CBI had alleged that the directors of the companies had paid a huge donation to the TMC.

On the February 3 incident, Kumar said the CBI officials, in a clandestine manner, approached his residence on Sunday at 6 PM, with media personnel, "after having gone in media describing me as an absconder, with the sole intent to harass me and tarnish my reputation and impeccable service record".

He also said that no police officer, ever sat or joined the 'dharna' along with Mamata Banerjee "in uniform or otherwise" at any given point in time.

The CBI had told the apex court that Kumar, who was leading the SIT in the Saradha chit fund scam, destroyed, destructed and tampered with material evidence in the form of call detail records (CDRs) of the prime accused and potential accused persons.

The agency had said a strong prima facie case of Kumar having committed offences both under Prevention of Corruption Act and other IPC offences has been made out.

It had also claimed that companies like Saradha, Rose Valley and Tower Group had given huge contributions to the Trinamool Congress.

The agency had said that the entire SIT, set up by the West Bengal government, is under investigation as it was conniving with accused and potential accused to subvert the investigating process.

It had said there is a large number of hard discs and other material still in custody of Kumar which he had collected as an investigating officer being the head of the SIT and being the functional head and day-to-day in-charge of SIT.

The CBI had said Kumar is prima facie guilty of having committed criminal offences and has not coordinated in spite of the summons being issued.

"Kumar has also destroyed, destructed and tampered with the material primary evidence in the form of CDRs while handing over the same to the CBI on June 28, 2018," the agency had said.