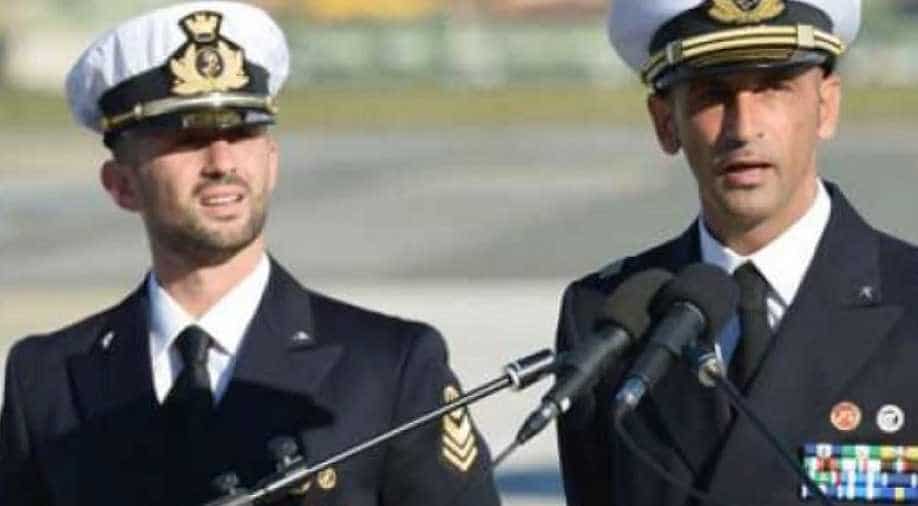 In February 2012, India had accused Salvatore Girone and Massimiliano Latorre, on board the MV Enrica Lexie of killing two Indian fishermen who were on a fishing vessel off Kerala coast.

The Centre has moved the Supreme Court seeking closure of judicial proceedings here against two Italian marines’ accused of killing two Indian fishermen, off the Kerala coast, saying that it has accepted the recent ruling of the Permanent Court of Arbitration (PCA) at the Hague which held that India is entitled to get compensation in the case but can't prosecute the marines due to official immunity enjoyed by them.

In February 2012, India had accused two Italian marines, Salvatore Girone and Massimiliano Latorre, on board the MV Enrica Lexie -- an Italian flagged oil tanker -- of killing two Indian fishermen who were on a fishing vessel off Kerala coast in India's Exclusive Economic Zone (EEZ).

In its application filed on Thursday in the pending case, the Centre told the top court, “The applicant states and submits that the Republic of India has taken a decision to accept and abide by the Award passed by the said Tribunal which would have the bearing on the continuance of present proceedings before this Court”.

The Centre said that the arbitration under United Nation Convention on the Law of Sea (UNCLOS), which was instituted on a request from the Republic of Italy has delivered its Award on May 21, 2020.

It said that the Tribunal upheld the conduct of Indian authorities with respect to the incident and highlighted the material and moral harm suffered by the Indian fishermen on board the St. Antony on February 15, 2012.

“It held that the actions of the Italian Marines breached India''s freedom and right of navigation under UNCLOS Article 87(1)(a) and 90,” the application said, adding, as argued by India, the Tribunal observed that, in principle, India and Italy had concurrent jurisdiction over the incident and a valid legal basis to institute criminal proceedings against the Marines.

The Centre said “However, it found that the immunities enjoyed by the Marines operate as an exception to the jurisdiction of the Indian courts and, hence, preclude India from exercising its jurisdiction over the Marines. The Tribunal also rejected Italy’s claim to compensation for the detention of the Marines”.

It said that the Tribunal took note of the commitment expressed by Italy to resume its criminal investigation into the events of February 15, 2012, and decided that India must take necessary steps to cease to exercise its criminal jurisdiction over the marines.

“The Tribunal decided that India is entitled to payment of compensation in connection with loss of life, physical harm, material damage to property and moral harm suffered by the captain and other crew members of “St. Antony". The Tribunal also held that the Parties are invited to consult with each other with a view to reaching agreement on the amount of compensation due to India,” the Centre said in its application.

The Centre said that the Tribunal also decided that it shall retain jurisdiction should either Party or both Parties wish to apply for a ruling from the Arbitral Tribunal in respect of the quantification of compensation due to India, and that, should no such application be received within one year after the date of the present Award, the proceedings shall be closed.

“India being a Party to the UNCLOS, in accordance with the provisions of the UNCLOS and the Rules of Procedure agreed by the Parties, the Award is final and without appeal and shall be complied with by the parties to the dispute (Article 11, Annex VII, UNCLOS)” it added.

The Centre placed the award on record with a prayer that the proceedings with regard to the incident dated February 15, 2012, be disposed of in conformity with the Award passed by the aforesaid Tribunal on May 21, 2020.

It sought disposal of the pending case before the top court in conformity with the award dated May 21, 2020.

Latorre, who had suffered a brain stroke on August 31, 2014, was first granted bail and allowed by the apex court on September 12, 2014, to go to Italy for four months and after that, extensions for his stay have been granted to him.

In Italy, Latorre had to undergo a heart surgery after which the top court had granted him an extension of his stay in his native country.

On September 28, 2016, the apex court had allowed Latorre to remain in his country till the international arbitral tribunal decided the jurisdictional issue.

On May 26, 2016, Girone was also granted bail with conditions and allowed by the top court to go to his country till the jurisdictional issue was decided.

The complaint against the marines was lodged by Freddy, the owner of the fishing boat ''St Antony'' in which the two Kerala fishermen were killed when the marines opened fire on them allegedly under the misconception that they were pirates.

The top court was earlier informed by the Centre that the international arbitral proceedings would be completed by December 2018 before the International Tribunal for Law of the Sea (ITLOS) in Germany.

The apex court had earlier stayed all criminal proceedings, including the trial of the two marines.

While allowing the joint request of India and Italy, the apex court had said the proceedings would remain stalled till the jurisdictional issue about which country has the right to conduct trial was decided through international arbitration.