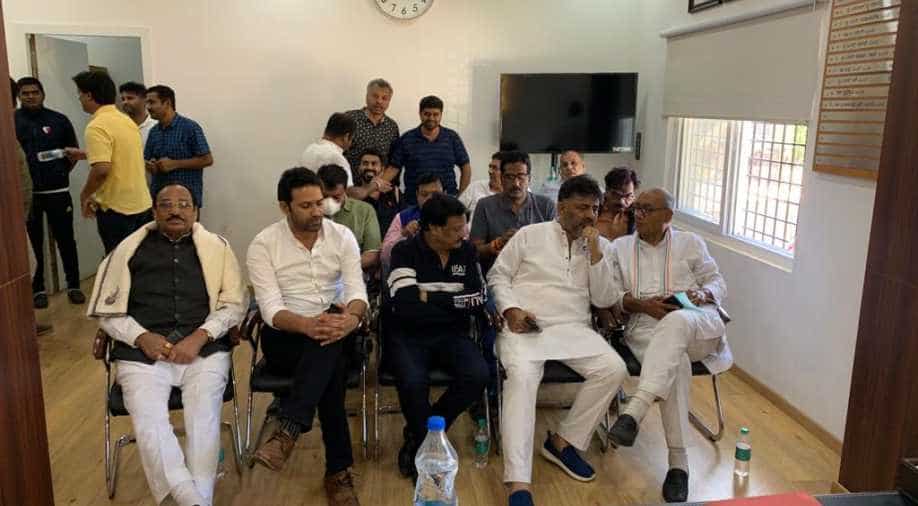 Congress leader Digvijaya Singh reached Bengaluru early morning on Wednesday and tried to enter the hotel. However, he was stopped from going into the hotel following which he sat on dharna there.

Bengaluru police on Wednesday took Congress leader Digvijaya Singh into preventive custody when he tried to meet the party rebel MLAs lodged in a five-star hotel in the city.

Congress leader Digvijaya Singh reached Bengaluru early morning on Wednesday and tried to enter the hotel. However, he was stopped from going into the hotel following which he sat on dharna there.

"Singh was taken into preventive custody near the Ramada resort as he was trying to stage a protest after he was denied entry into it to meet the rebel MLAs," a police official said.

Digvijaya Singh & other leaders are now being taken out of Amruthahalli Police Station in Bengaluru. He says, "I don't know where am I being taken. I should have been allowed to meet my MLAs. I am a law-abiding citizen. Sarkar bhi bachaenge aur hamare MLAs ko bhi wapas laenge." https://t.co/tGfWcXdRIn pic.twitter.com/aWIxuxFywK

Heavy security has been deployed in and around the resort in the city`s northern suburb since Sunday after the rebels MLAs shifted here from another resort.

Digvijaya Singh said, "I am a Rajya Sabha candidate I am not allowed to meet the MLAs."

Shivakumar said, "The Congress party is united and we have our own political strategy."

In the apex court when the matter comes up for hearing, senior advocate Kapil Sibal will appear for the Madhya Pradesh government and Abhishek Singhvi for the Speaker.

The BJP has moved the top court for holding a floor test in Assembly as it thinks the Kamal Nath government has lost its majority.