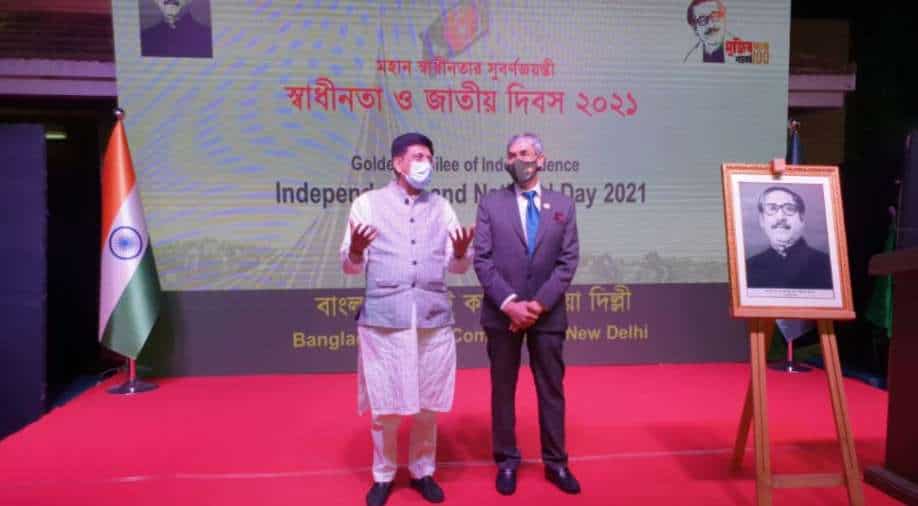 The economic size of Bangladesh is $330 billion, with GDP growth during COVID times standing at 5.2%

Bangladeshi's high commissioner to India Muhammad Imran has highlighted his country's economic progress and how the country is developing fast.

Speaking at the Independence Day celebration of his country at the high commission, he said, "Bangladesh has become a role model for fighting poverty, empowering women, disaster management. We have made commendable progress in achieving food security despite frequent natural disasters...The economy of Bangladesh is developing rapidly"

The economic size of Bangladesh is $330 billion, with GDP growth during COVID times standing at 5.2%. Now 99% of the country has access to electricity, 150 million people have a mobile phone and 100 mn are connected to the internet. It has its own satellite in space since 2018, and second one will be launched soon.

Bangladesh's textile industry is second largest in the world, fourth largest rice producer and is self-sufficient in food. Foodgrain production increased more than four times, from 1971 to 2020. This year, it fulfilled all the criteria to get the status of a developing country, from the Least Developed Country status.

Imran also paid tributes to Indian soldiers who laid down their lives for the liberation of his country in 1971. This year, the country is celebrating its 50th year of Independence from the then West Pakistan. March saw an almost a month-long celebration, including visits of leaders of India, Maldives, Nepali, Bhutan and Sri Lanka.

Imran said, "We recall with deep gratitude, the contribution of people and government of India for their moral and material support during our difficult days".

"Bangladesh acknowledges the support received from our neighbours and remember our friends around the world who stood beside us for our just cause."

Bangladesh will be building a memorial for Indian soldiers in Ashuganj near Dhaka, the foundation stone for which was laid during PM Modi's Bangladesh visit in March.

He pointed out that the "emotional bonds between India and Bangladesh stem from the invaluable contribution from the people and government of India in the war of liberation in 1971. In the last decade, relations have reached a golden chapter, achieving a comprehensive partnership covering all possible area of cooperation"

Both countries have seen high-level visits, including the visit of Prime Minister Narendra Modi and External Affairs Minister Jaishankar to Bangladesh in March. That was Modi's first foreign visit during Covid pandemic. Dhaka and Delhi are working to revive old connectivity routes and establish new ones.

"India will be able to use both land and water routes in Bangladesh, to go to northeastern states from the mainland", Imran said.

Earlier this year, a bridge over the Feni river was inaugurated, connecting India's North East with Bangladesh. The countries share 54 rives, maximum for any two countries globally.

Imran also spoke about the issue of Rohingyas, the displaced minority community from Myanmar that has taken refugee in the country. Bangladesh is hosting 1.2 million Rohingya refugees and is keen for "safe and early" repatriation of the community.

He said, "to keep on supporting them for an indefinite period would be asking too much for a country like us which has its own domestic development targets to achieve with limited resources...we all want to avoid the rise of any radicalism, which can seriously impact peace, stability, economic growth in the region and beyond".