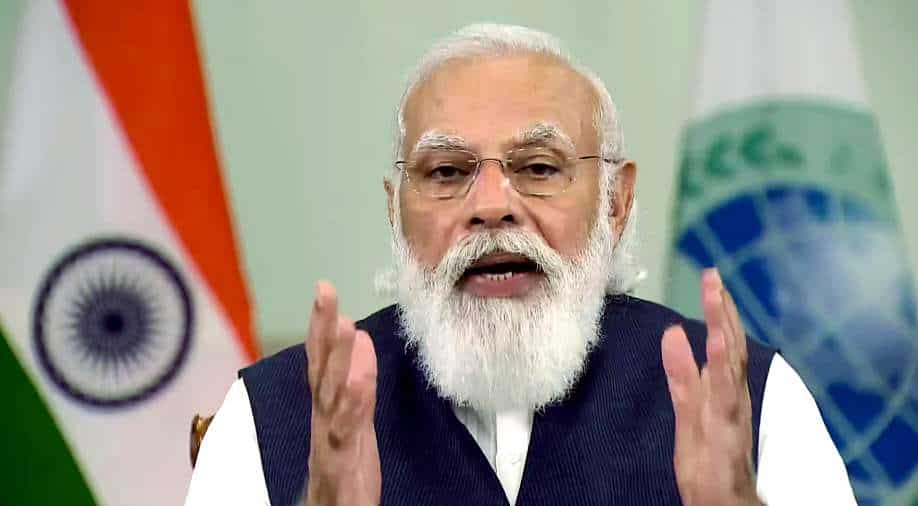 Prime Minister Narendra Modi addresses the Plenary Session of the 21st meeting of SCO Council of Heads of State hosted by Tajikistan, through video conferencing, in New Delhi on Friday. Photograph:( ANI )

Mentioning Afghanistan, the PM called on the group to take "initiative on this issue". Afghanistan was taken over by the Taliban last month, and many Central Asian countries, including Tajikistan and Uzbekistan, are concerned about an increase in refugee influx as a result of the insecurity.

Indian Prime Minister Narendra Modi on Friday virtually addressed the Shanghai cooperation organisation or SCO summit, highlighting Central Asia's Sufi heritage to fight extremism. At the summit, which took place in a hybrid format, and India was represented in person by External Affairs Minister Dr Jaishankar, the PM talked about "challenges" in the area which is "related to peace, security, and trust deficit" and the root cause of these problems being "increasing radicalization."

PM Modi highlighted how Central Asia has been a "bastion of moderate and progressive cultures and values" and "traditions like Sufism have flourished here over the centuries and spread throughout the region and the world." Based on this "historical heritage of Central Asia, SCO should develop a common template to fight radicalization and extremism."

PM proposed that SCO should work to "develop a strong network" between "moderate, tolerant, and inclusive institutions and traditions associated with Islam" in SCO countries and lauded the "useful work being done by SCO-RATS". SCO RATS is the group's Regional Anti-Terrorist Structure (RATS) which is headquartered in Tashkent, Uzbekistan and aims at increasing cooperation among member states on the issue of counter-terror, separatism and extremism. India will soon take over the Presidency of SCO-RATS.

Mentioning Afghanistan, the PM called on the group to take "initiative on this issue". Afghanistan was taken over by the Taliban last month, and many Central Asian countries, including Tajikistan and Uzbekistan, are concerned about an increase in refugee influx as a result of the insecurity.

He also welcomed Iran as its new member state and the inclusion of Saudi Arabia, Egypt, and Qatar as its dialogue partners. All 4 countries are India's close partners in West Asia. PM said, "The expansion of SCO shows the growing influence of our organisation. SCO will become stronger and more credible with new Members and Dialogue Partners." SCO has 8 members so far-- Russia, China, India, Pakistan, and 4 central Asian countries--Tajikistan,  Uzbekistan, Kazakhstan, Kyrgyzstan. The last major expansion saw India and Pakistan included in the mega China-led grouping.

A specific focus was also on connectivity in the speech, with the PM emphasising the role of central Asia as a "connectivity bridge between major regional markets" and retreating from New Delhi's commitment to increasing connectivity with that part of the world. He batted for Iran's Chabahar port and International North-South Corridor that has huge Indian investment.