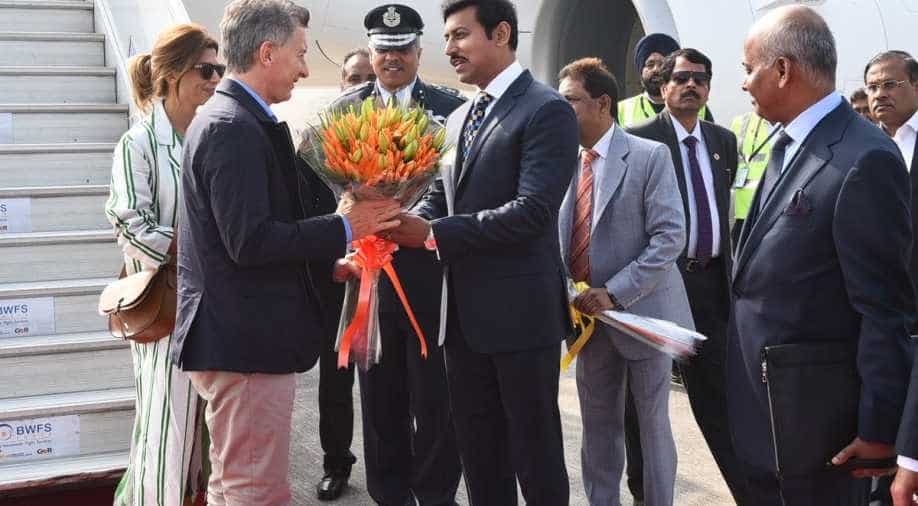 Argentina's President Mauricio Macri arrived Sunday on a three-day India visit during which he will hold talks with Prime Minister Narendra Modi to enhance cooperation in key sectors such as economy, nuclear technology and space.

President Macri was received at the airport by Information and Broadcasting Minister Rajyavardhan Rathore.  "Bienvenido Se or Presidente! President of #Argentina @mauriciomacri arrived in Delhi on a 3-days State Visit, accompanied by First Lady & a high level delegation. India and Argentina are celebrating the 70th anniversary of establishment of diplomatic relations," Ministry of External Affairs Spokesperson Raveesh Kumar tweeted.

Macri will hold delegation-level talks with Modi and have other official engagements on Monday.

During his visit, President Macri will also meet President Ram Nath Kovind.
He will travel to Mumbai on February 19. He is also likely to visit Agra during his trip.

Macri's visit to India follows Modi travelling to Argentina in late 2018 for the G20 summit, during which the leaders had a "very productive" bilateral meeting.

The trade between the two sides stands at around USD 3 billion.
"This visit will provide opportunity to the two sides to review progress in bilateral ties and to explore new avenues of cooperation," the MEA had said.