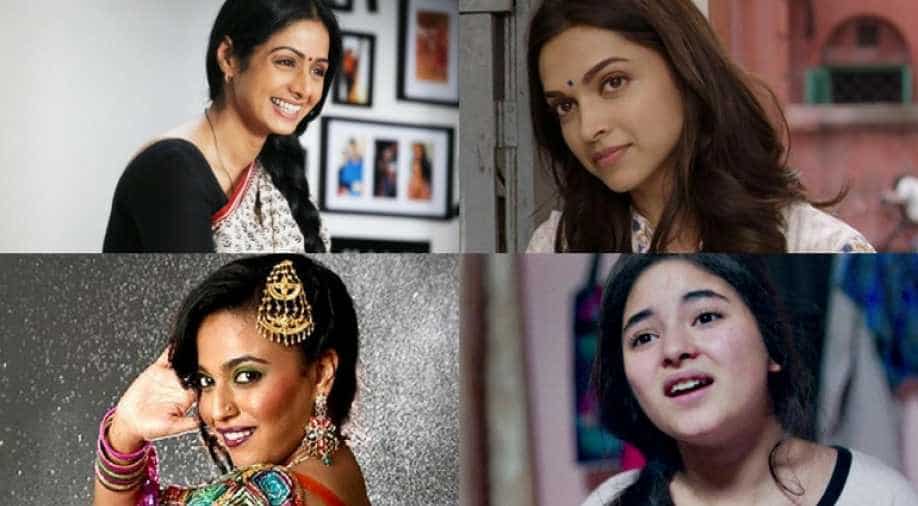 On Women's Day, here are the 12 path-breaking roles that changed the way we perceive women characters on screen. Photograph:( WION )

Bollywood films have most often been blamed for promoting misogyny through its cinema. For years women characters have just been used as props in the narrative. Sure, there have been films that have had strong women characters, but those have been far and few in between.

While we have celebrated films like Mother India, Aandhi and Mirch Masala in the past, there are certain films that have changed the tide for the better in the recent past with their strong female roles. These characters have not just changed the way we percieve women in Hindi cinema but have also helped in addressing some pertinent issues plaguing our society.

On Women's Day, here are the 12 path-breaking roles that changed the way we perceive women characters on screen.

English Vinglish: Sridevi's comeback was highly anticipated and when she finally did with Gauri Shinde's English Vinglish, we couldn't get enough of her. Known mostly for her ultra-glamorous roles throughout her career, Sridevi chose to play an underdog in her come back film. A story of a simple house-wife yearning to gain the respect of her family and thus taking up classes in spoken English- Shashi was easily relatable to most of us and our mothers. More importantly, the film highlighted the immense work that our mothers put in at home and outside.

Angry Indian Goddesses: What's there not to like about Angry Indian Goddesses really? The film celebrates sisterhood in its true sense where a group of seven friends gathers in a quaint villa in Goa for a bachelorette party of one of their own. Their party abruptly comes to an end when one of them goes missing one night. The film perhaps was the first mainstream film to openly talk about homosexuality and raised the importance of acceptance.

Kahaani: A pregnant Vidya Balan walking around alone in the chaotic city of Kolkata looking for her missing husband made for a very intriguing storyline. With no big male star- the film completely focussed on Vidya Bagchi- the main protagonist, who may on the surface look like a hapless woman in search of her husband, but in reality was a strong-willed woman who came to an unknown land on a mission. And who could have predicted that brilliant climax in the end?

Queen: How fun can it be to go on a honeymoon alone? Apparently a lot. Kangana Ranaut's Rani taught each one of us the importance of loving one's self and putting oneself before everything else. Didn't we all crave to go on a trip alone after watching Queen? Perhaps the most spirited character of our times, Rani remains one of the most relevant characters in Indian cinema till date.

Anaarkali of Aarah and Pink
No means no. Two of the most powerful films, Anaarkali of Aarah and Pink spoke about consent and delivered a very pertinent and a strong message. That a woman can sing provocatively, flirt with you even, and wear revealing clothes, but if she says no to a sexual relationship, she must be respected. The four women in these two films were strong-willed and despite the stark backgrounds they belonged to, all these characters  echoed the thoughts of women across the country.

Highway: How many mainstream films in Bollywood have talked about child sex abuse the way Veera does in the end? The film highlighted that no money can buy you happiness and that one can find peace and freedom in the most uncanny of places. Alia Bhatt and Randeep Hooda's powerful performances, coupled with AR Rahman's soulful music made this Imtiaz Ali film a sublime watch.

Margarita With A Straw and Lipstick Under My Burkha: These films had their flaws but still need to be celebrated for they both spoke about women's desire. In India, to talk about sex and one's sexual desire openly is considered a taboo, especially for women. A woman talking about what she wants in bed openly is often frowned upon. But both these films celebrated women who were perhaps comfortable expressing their feelings about sex. Be it Laila, a girl with cerebral palsy, who does not mind swinging both ways in Margarita, With A Straw to a 55-year-old Usha Parmar who reads erotic novels and yearns for her hot swimming coach, these women were unabashed and strong in their own unique way.

Piku: Shoojit Sircar's Piku was a story that most urban, working women could relate to. Deepika Padukone as Piku was financially independent, successful in her career and a parent to her whimsical, hypochondriac father. She had her needs, she wanted to settle down with a man, but more importantly, she gave all her time and energy to her father.

Secret Superstar: A spirited, talented young girl not only realizes her own dreams but also helps to free her mother from an abusive marriage. Secret Superstar gave so many of us hope to dream big and more importantly to break free when it becomes ugly. And if a 14year old girl can do it, so can others, no?

Nh10: Anushka Sharma starrer NH10 not only was a nail-biting thriller but it was also a film that highlighted a very important point- that a woman can look after and protect herself in terms of crisis. If she is pushed to the wall, she has the strength to fight back and how.