Watch: We almost had to beg for our lives, says Miss Venezuela on her country's economic crisis 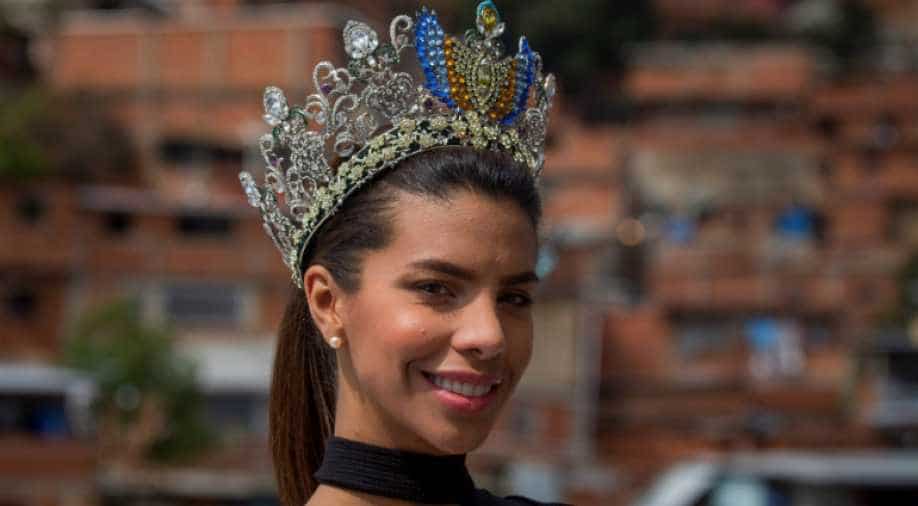 Isabella Rodriguez said she believes Venezuela will soon emerge from a long-standing crisis marked by food and medicine shortages.

The reigning Miss Venezuela says she has been robbed at gunpoint, forced to scramble to put food on the table and had to bid a tearful farewell to two brothers who fled the South American country's economic crisis.

Yet despite shortages of basic products and the world's highest inflation rate, deep political uncertainty and elevated levels of crime, Isabella Rodriguez says she remains hopeful that things will improve.

A dark-skinned model who hails from a slum located on steep hills in Caracas' eastern outskirts, the 25-year-old Rodriguez doesn't fit the typical beauty mould in pageant-crazy Venezuela, but her life experiences accurately mirror those of the majority of her compatriots.

Speaking with equal passion about the Petare shantytown where she still lives and her personal spirituality, Rodriguez said on Wednesday that she wants to leverage those dual aspects of her identity to help local residents of that low-income district, particularly young girls.

An avowed feminist, she plans to provide counselling and give talks on women's empowerment as part of the social-work duties that accompany her new title as Miss Venezuela, which she won in December.

Rodriguez stressed the importance of gender equality in any line of work and said her example can be used to show young girls from Petare - considered Latin America's largest shantytown - that persistence is rewarded and dreams can come true.

The beauty queen was one of hundreds of thousands of people who took to the streets of Caracas on January 23 to protest against a debilitating economic crisis that has led to an exodus of millions of Venezuelans in recent years.

Two of those emigrants are Rodriguez's brothers, who traveled to Peru in search of greater economic opportunities.

"I want to be in a country with security... because I also have the right to a normal diet, the right to live in peace," she said, adding that thousands of people like her, especially in poor areas of the country, share that same yearning and are willing to work for the common good.

Without mentioning the political conflict between leftist President Nicolas Maduro's administration and the opposition-led legislature, whose speaker has declared himself the interim head of state, Rodriguez said she believes Venezuela will soon emerge from a long-standing crisis marked by food and medicine shortages, high levels of violent crime and hyperinflation.

The beauty queen has experienced these scourges first-hand, noting that she and her parents have wondered at times what they can afford to eat and that she was a victim of an armed robbery in her own neighbourhood.

"We almost had to beg for our lives," Rodriguez said, adding that on another occasion she and numerous other people - including school-aged children - came upon the body of a slain man while descending a steep hillside in Petare.

Separately, Rodriguez also expressed support for Spaniard Angela Ponce, who last year became the first transgender contestant in a Miss Universe competition, saying that "when a person decides to pursue a dream ... there's no reason for us to judge her."

The Venezuelan herself was the target of ridicule and prejudice after her coronation, with some social-media users posting racist and classist messages that denigrated her physical features and humble origins.

"Criticism has never affected me... I know how much effort I put in to win the crown," she said, noting that gaining tens of thousands of followers on social media has been a positive because she has been able to raise money for sick children.

Rodriguez also has used her online presence to denounce acts of xenophobia experienced by some of her countrymen in Ecuador, where the murder of a pregnant Ecuadorian woman by a Venezuelan migrant triggered an immigration backlash.

"That really hit me hard... we're surrounded here by Ecuadorians, Colombians, and they're very welcome," the beauty queen said, calling for rationality and common sense to prevail.

With her origins in a low-income neighbourhood and evident love for a country she doesn't want to abandon and longs to see prosper, Rodriguez is perhaps a perfect representative of Venezuela, and not only because she will wear a sash bearing her country's name later this year at the Miss World pageant in Thailand.