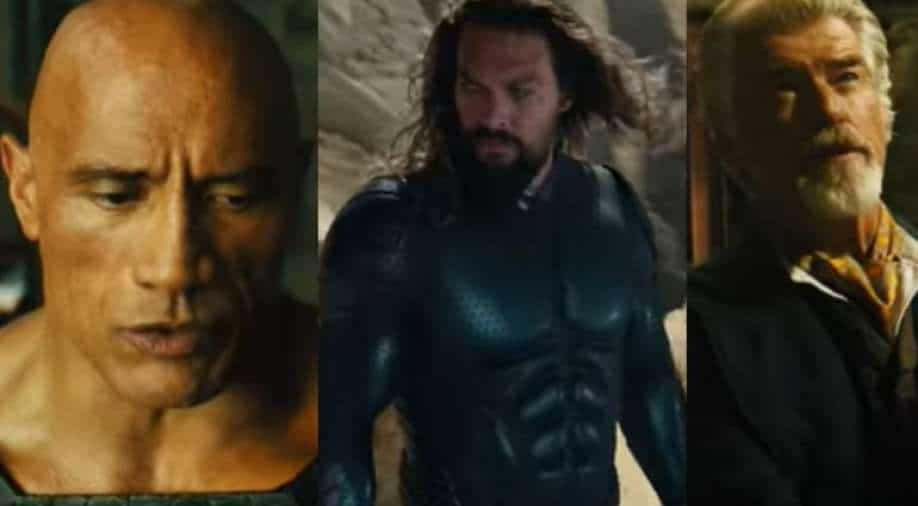 There’s also the first look at Pierce Brosnan as Doctor Fate in the upcoming 'Black Adam',

Warner Bros has recently unveiled the first-look footage from its most anticipated upcoming DC superhero movies, including 'Aquaman and the Lost Kingdom', 'Black Adam', The Batman' and 'The Flash'.

The studio took to their official Instagram handle to share a video clip, titled “The World Needs Heroes.”

The 'Aquaman' sequel footage is the shortest compared to other superheroes clips. The brief shot shows Jason Momoa in front of ancient ruins and is sitting on his throne.“What could be greater than a king? A hero.” Momoa says an audio clip lifted from 2018’s 'Aquaman'.

`Aquaman and the Lost Kingdom` will open in theatres on December 16.

The studio also provided a first look glimpse at Pierce Brosnan as Doctor Fate in the upcoming `Black Adam`, as well as a glimpse of the rest of the `Justice Society of America`:

Atom Smasher (Noah Centineo), Hawkman (Aldis Hodge) and Cyclone (Quintessa Swindel). The film is headlined by Dwayne Johnson who is playing Black Adam that is slated to release on July 29, 2022.

Ezra Miller's look in his new speedy superhero suit for his long-awaited `The Flash` stand-alone film was also notable in the video. The movie is coming on Nov. 4.

(With inputs from the agency)
The clip also features `The Batman` starring Robert Pattinson that is slated to release in theatres in March 4.