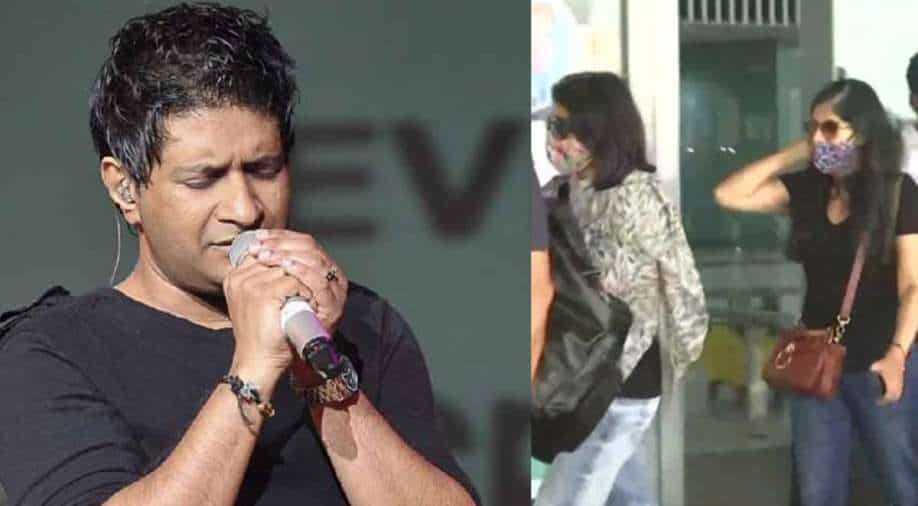 File image of KK and the singer's family at Kolkata airport Photograph:( Twitter )

Bollywood singer KK's wife Jyothi Krishna along with their son Nakul and daughter Taamara were clicked at Kolkata airport on Wednesday afternoon as they arrived to take the mortal remains of the singer back home.

The family was seen exiting the airport and did not interact with the press which had gathered outside the airport. Later, they were clicked entering the Kolkata hospital where the latter singer's body has been kept.

Hours before his demise, the legendary singer performed at the Nazrul Mancha auditorium till 8:30 pm. Suddenly, he fell ill and was brought to the CMRI hospital in Kolkata, where he was declared dead.

West Bengal | Family of singer #KK arrives in Kolkata. The singer passed away last night after a live performance in the city. His body is kept at CMRI hospital from where it will be taken to SSKM hospital. pic.twitter.com/F9kDmZDqz4

West Bengal | Family of singer #KK reaches CMRI hospital in Kolkata where his body has been kept. pic.twitter.com/VN3a1Uch2R

The news of his untimely demise has left his fan shattered and the entertainment industry under shock, the legendary singer was gifted with a boisterous yet mellifluous voice that will be remembered by his fans for many decades to come.

KK was one of the most versatile singers in the Indian film industry, and recorded songs in several languages, including Hindi, Tamil, Telugu, Kannada, and Bengali.

The CM of West Bengal, Mamata Banerjee said the singer will be given gun salute at Kolkata's Rabindra Sadan. The post mortem is still under way. The film will be heading back by the 5:15 PM flight.